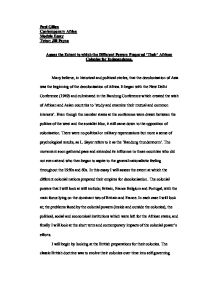 Assess the Extent to which the Different Powers Prepared 'Their' African Colonies for Independence.

Paul Gillen Contemporary Africa Module Essay Tutor: Jill Payne Assess the Extent to which the Different Powers Prepared 'Their' African Colonies for Independence. Many believe, in historical and political circles, that the decolonisation of Asia was the beginning of the decolonisation of Africa. It began with the New Delhi Conference (1949) and culminated in the Bandung Conference which created the wish of African and Asian countries to 'study and examine their mutual and common interests'. Even though the member states at the conference were drawn between the politics of the west and the socialist bloc, it still came down to the opposition of colonisation. There were no political or military repercussions but more a sense of psychological results, as L. Sayer refers to it as the 'Bandung thunderstorm'. The movement soon gathered pace and extended its influence to those countries who did not even attend who then began to aspire to the general nationalistic feeling throughout the 1950s and 60s. In this essay I will assess the extent at which the different colonial nations prepared their empires for decolonisation. The colonial powers that I will look at will include; Britain, France Belgium and Portugal, with the main focus lying on the dominant two of Britain and France. In each case I will look at; the problems faced by the colonial powers (inside and outside the colonies), the political, social and economical institutions which were left for the African states, and finally I will look at the short term and contemporary impacts of the colonial power's efforts. I will begin by looking at the British preparations for their colonies. The classic British doctrine was to evolve their colonies over time into self governing bodies, and whilst this had happened in the majority of British protectorates it had not even begun in Africa. After World War II the Atlee government brought African affairs to the forefront of British Foreign policy and recognised the African states rights to self determination through political, social and economic progress1. ...read more.

It was the first of the North African protectorates to be colonised and was firmly etched on the French romantic mind where many painters, poets, adventurers and novelists would describe this part of the French 'Orient'6. The attachment to the protectorates did spread further than romanticism. In relation to the rest of Africa, excluding the apartheid south, these Northern states had excelled themselves underneath French rule and the French did not wish to lose places they had a distinct hand in the transformation and modernisation of, not to mention the risk to the huge amount of French nationals there. They wished for limited political autonomy for the natives and believed that Europeans should, in all circumstances, partake in the running of if not being the sovereign power. Post 1950 however there was successive national fronts and no matter which way the French interpret it, the general belief is that they were forced to give up sovereignty. This can be shown by the independence of Morocco and Tunisia occurring within two years of each other in 1956 and 1958. In dealing with this issue you cannot help but relate to the issue of the Algerian/French conflict. A bloody and vicious war fought over the separation of Islam and Arabic from the state and the French government's protection of the French settlers, which stood at roughly one eight of the Algerian population. The significance of the length, and its utmost irony, is that French decolonisation began and ended with Algeria. The conflict was so significant that it almost resulted in revolution on the streets of Paris. When Algeria became a sovereign state in July 1962 it was a result of compromise between the FLN and France which again shows how the French wished to hold on in some way, shape or form in its colonies. In this case the French maintained interest in the Algerian oil fields whilst gaining a naval base at Mels-el-Kebir7. ...read more.

Along with this you had the fact that forty per cent of Angola's imports and a third of Mozambique's were provided by Portugal13. Under Salazar industrialisation in Portugal was taking off and the economy was now being based more towards Europe, this was further compounded by Portugal's admission to the European free trade area. However with the former beliefs in their minds the Lisbon governments became more determined to defeat the armed resistance movements in Angola, Mozambique and Guinea-Bissau. In a strange series of events, especially in Angola where even the Cuban army became involved, Portugal was not powerful enough to keep control and lost her last colony, Angola, in 1974.14 In conclusion when we look at the styles of the four main imperial powers in Africa we can see four distinctive elements. Britain was in favour of 'indirect rule' and managed disengagement. Indirect rule was ruling through existing structures and were very much hands off with the local elite simply being transferred with a few exceptions. France, in learning from its mistakes in Algeria and Indochina (Vietnam), by the 1960s pulls out very quickly but, like Britain, left a French educated elite and since then has had a very active African policy. In many respects I think most people would agree that they haven't really left at all. Belgium seems to have panic as policy. At the first sign of nationalistic rustlings they freak out, try poorly to sort things out and pull away and leave a huge mess that the UN usually has to sort out in the following years. Portugal follows the way of intransigence and flight when dealing with her colonies. As mentioned Portugal itself was bordering on poverty and the colonies were healing for the national moral. When disputes broke out they fought until they could do no more and were forced to leave, militarily and economically ruined. Again a political, social and economic mess was left in their wake. With foresight, not many colonies were properly prepared. ...read more.