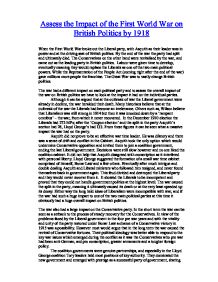 Assess the Impact of the First World War on British Politics by 1918.

Assess the Impact of the First World War on British Politics by 1918 When the First World War broke out the Liberal party, with Asquith as their leader was in power and at the driving seat of British politics. By the end of the war the party had split and ultimately died. The Conservatives on the other hand were revitalised by the war, and came out as the leading party in British politics. Labour were given time to develop, eventually meaning they would replace the Liberals as one of the two main political powers. While the Representation of the People Act (coming right after the end of the war) gave millions more people the franchise. The Great War was to vastly change British politics. The war had a different impact on each political party and to assess the overall impact of the war on British politics we have to look at the impact it had on the individual parties. Although it can be argued that at the outbreak of war the Liberal government were already in decline, the war heralded their death. Many historians believe that at the outbreak of the war the Liberals had become an irrelevance. ...read more.

Of all three parties the Tories were the winners at the end of the war in 1918. They were the only fully united party and had the advantage of Liberal divisions and Labour inexperience. Although they had no Prime Minister during the war, they were in a strong period to dominate the inter-war period. The war re-asserted the Tories as the most powerful force in British politics and put them in a position to dominate the British government during the inter war period. The war was also of significance to the Labour party. Although in the short term the war exposed the divisions in the Labour party, in the long term it helped their development. At the outbreak of war there was a split in the Labour party as many were pacifists, believing it was a class war fought on behalf of the rich. However those who were opposed generally did not campaign against it, and so this division was no were near as bad as that in the Liberal party, and it was not a lasting split. In the long term the war can be seen to have affected the party positively. Labour gained vital ministerial experience from the war as Henderson was in both coalition governments. ...read more.

By the time the coalition collapsed Unionists had 344 seats, Lloyd George Libs a mere 53. This general election shows the large impact the war had on British politics. It led to a four year post-war experiment in peacetime coalition government. This election effectively redrew the political map of Britain as Labour and Liberal strongholds fell to the coalition. This coalition government shows just how much the Great War changed British politics. Ultimately the Great War had a huge impact on British politics. The upheval on the political scene was immense. The war caused the demise of one of the two main pre war political parties and placed the Conservatives in a position to control the inter war government. It also affected what would soon become the second party of British politics, giving Labour time to develop. It allowed them to re-assert their independence and re-organise, which led to them fully maturing as a political party. It also partly led to the Representation of the People act, which greatly affected British politics. This act massively increased the no. that could vote and so made Britain more democratic. Blake said when speaking about the impact of the First World War 'In the world of politics, remarkable transformations were to take place... The old party divisions were to blur and fade and new alignments were to arise, new allegiances, new enmities.' ...read more.