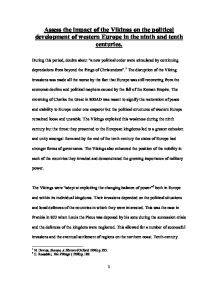 Assess the impact of the Vikings on the political development of western Europe in the ninth and tenth centuries.

Assess the impact of the Vikings on the political development of western Europe in the ninth and tenth centuries. During this period, doubts about "a new political order were stimulated by continuing depredations from beyond the fringe of Christendom".1 The disruption of the Viking invasions was made all the worse by the fact that Europe was still recovering from the economic decline and political mayhem caused by the fall of the Roman Empire. The crowning of Charles the Great in 800AD was meant to signify the restoration of peace and stability to Europe under one emperor but the political structures of western Europe remained loose and unstable. The Vikings exploited this weakness during the ninth century but the threat they presented to the European kingdoms led to a greater cohesion and unity amongst them and by the end of the tenth century the states of Europe had stronger forms of governance. The Vikings also enhanced the position of the nobility in each of the countries they invaded and demonstrated the growing importance of military power. The Vikings were "adept at exploiting the changing balance of power"2 both in Europe and within its individual kingdoms. ...read more.

In the mid tenth century Edgar proclaimed in his fourth law code that 'there should be in force amongst the Danes such good laws as they best decide on'.7 This gave the area of Danelaw a great degree of political freedom. During the tenth century when the Scandinavian kings were ousted, the political activities of the southern kings remained limited due to the appointment to positions of authority men with interests in both the south and north of the country. This was to ensure their acceptance by the northern lords but meant that the southern rulers never had complete control over Scandinavian influence. Hadling notes that the lawcode passed by �thelred II was "thoroughly Scandinavian in form and content"8 indicating that the primary writer was not the West Saxon king or his council. This situation appears to be the origin of the cultural separation between north and south England and its relative political independence, which continued throughout most of British history. It also accounts for the power of the northern lords, such as the Duke of York, in later years. By AD900 the notion of a united England was being hindered by the Viking possession of a number of areas. ...read more.

However, their time as total rulers was over. Despite their obvious affects on the political regimes in Europe during the discussed period, an unjustified amount of blame is placed on the Vikings for causing strife for the kingships of European countries. As they were often recruited in the war bands of dissatisfied lords and pretenders to the throne who subsequently harried their kings, the fault for any political change or disruption was said to be theirs. This was particularly the case in Ireland where Vikings made a good income as professional warriors for warring factions and thus became involved in Irish power politics. By the end of the tenth century the northern European kingdoms had become stronger, primarily as a result of the pressures and threats from the Vikings. These forced the European races to look for greater unity and attempt to strengthen the government of their kingdoms. Aspects of Scandinavian governing styles, such as the importance of noble patronage and the power of the nobility themselves, were introduced. The necessity of military strength for every country and its King was highlighted, as were the advantages of inter-racial alliances. The Scandinavian invasions therefore had introduced and reaffirmed trends and factors that remained significant in European political development for many centuries. ...read more.