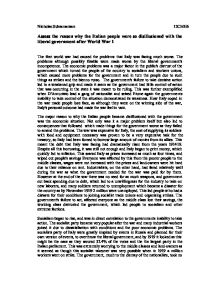 Assess the reason why the Italian people were so disillusioned with the liberal government after World War 1 The first world war had caused the problems that Italy was facing much worse. The problems although possibly fixable were made worse by the liberal government's incompetence. The economic problems was a major factor in the public's distrust of the government which turned the people of the country to socialism and workers unions, which caused more problems for the government and in turn the people due to such things as strikes and the bienno russo. The government's failure to take decisive action led to a weakened grip and made it seem as the government had little control of action that was occurring in the state it was meant to be ruling. This was further exemplified when D'Annunizio lead a gang of nationalist and seized Fiume again the governments inability to take control of the situation demonstrated its weakness. ...read more.

This led people who had a distaste for their conditions to joining socialist trade unions and organising strikes. The government's failure to act, affected everyone as the middle class lost their savings, the working class distrusted the government, which led people to socialism and other extreme factions. Socialism began to rise, and was in direct correlation to the governments inability to take action. The socialist party became very popular after the war and many industrial workers joined it due to dissatisfaction with conditions and the poor economic problems. The socialists party of Italy were greatly inspired by events in Russia and planned for their own version of events, to overthrow the liberal government, and by 1919 it looked as this might be the case as they secured 32.4% of the votes and the the largest party in the Italian parliament. This was extremely worrying to the middle classes and land-owners as it seemed as though this socialist takeover was very possible when in 1919 a million workers went on strike. ...read more.

Fiume was significant as D'Annunizio led an uprising which again was unchallenged as the government did not want to appear as it was taking sides. Other land such as former German colonies that had been promised to Italy in the treaty of London, when not given made the nationalists furious and blamed it on the weakness of the government which made people think that the war effort was in vain as there was no gain just mass economic problems and loss of lives. These are the main reasons to why people disillusioned with the liberal government failure to deal with economic problems and control its problems and people. These failures led to its downfall and in desperation people turned to more radical people and parties on both side of the political spectrum, right and left, as they were promising action, something the liberal government rarely did, and quick fixes to problems that the liberals would hope just went away. Nicholas Subramaniam 12CMH6 ...read more.