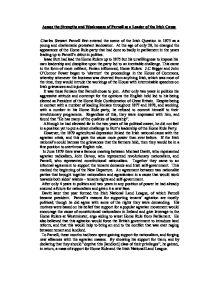 Assess the strengths and weaknesses of Parnell as a leader of the Irish cause.

Assess the Strengths and Weaknesses of Parnell as a Leader of the Irish Cause Charles Stewart Parnell first entered the scene of the Irish Question in 1875 as a young and charismatic protestant landowner. At the age of only 29, he changed the appearance of the Home Rule party that had done so badly in parliament in the years leading up to Parnell's debut in politics. Isaac Butt had lead the Home Rulers up to 1875 but his unwillingness to impose his own leadership and discipline upon the party led to an inevitable challenge. This came in the form of more militant, Fenian influenced, Home Rulers. J.C Bigger and John O'Connor Power began to 'obstruct' the proceedings in the House of Commons, whereby whenever the business was diverted from anything Irish, which was most of the time, they would intrude the workings of the House with interminable speeches on Irish grievances and injustices. It was these Fenians that Parnell chose to join. After only two years in politics his aggressive attitude and contempt for the opinions the English held led to his being elected as President of the Home Rule Confederation of Great Britain. Despite being in contact with a number of leading Fenians throughout 1877 and 1878, and working with a number in his Home Rule party, he refused to commit himself to their revolutionary programme. ...read more.

The violence raised problems for Parnell, who was away in America raising money for the league, and spreading the word about Irish nationalism. His 'tour' was cut short when he came home to fight the 1880 general election. A month later he was elected as president and leader of the Irish Parliamentary Party. He managed to get his abilities shown, despite resentment against him for his involvement with the Fenians and Agrarian Radicalism. Thusly, his problem of unity lingered. In only 5 years of politics he had become leader of the Irish Parliamentary Party and this rise to power was "the most brilliant political performance in Irish history". Prime Minister Gladstone pushed a second land reform act through the Commons and Lords, in 1881, in order to gain agrarian support. This left Parnell with a dilemma. As he was the Irish Parliamentary Party leader, he had to continue his support for both the militants and the moderates throughout Ireland and the UK and indeed in America. By supporting the Land Act, he would lose favour with the radicals, but if he opposed it he may lose support from the moderates. He stalled for time in this instance, by criticising aspects of the act. ...read more.

He cited Parnell has a respondent on the grounds for adultery with Mrs. Katharine O'Shea. The case came to court in November 1890, and Parnell offered no defence. This divorce led to Parnell's personal reputation being ripped to tatters, and his political career was in ruins. Gladstone found himself under pressure from a wing of his liberal party who refused to accept an alliance with a party whose leader was a self-confessed adulterer. On the first of December 1890, the Irish Parliamentary party met at the House of Commons. The party split with 45 renouncing Parnell's leadership and 37 supporting him. One of Parnell's most bitter opponents, Timothy Healy, said that "the necessities of Ireland are paramount" in response to the scandal that arose. Parnell reacted to this enmity he was facing with characteristic defiance. In the summer of 1891, he fought one last campaign in Ireland at a series of by-elections. Overall however, the anti-Parnellites won, and he died on the 6th of October 1891. Parnell's years of politics had their ups and downs, but he remains thought of as "the uncrowned king of Ireland". He suffered severely for his indulgence of a mistress, and it was this that brought him crashing down. As a leader, he was suitably pragmatic, and set to go far. He took Irish nationalism to heights that it had never reached under the leadership of Emmett or Tone. ...read more.