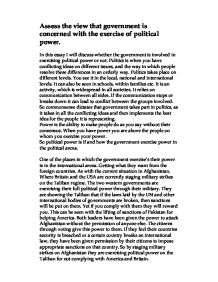 Assess the view that government is concerned with the exercise of political power.

Assess the view that government is concerned with the exercise of political power. In this essay I will discuss whether the government is involved in exercising political power or not. Politics is when you have conflicting ideas on different issues, and the way in which people resolve these differences in an orderly way. Politics takes place on different levels. You see it in the local, national and international levels. It can also be seen in schools, within families etc. It is an activity, which is widespread in all societies. It relies on communication between all sides. If the communication stops or breaks down it can lead to conflict between the groups involved. So commonsense dictates that government takes part in politics, as it takes in all the conflicting ideas and then implements the best idea for the people it is representing. Power is the ability to make people do as you say without their consensus. When you have power you are above the people on whom you exercise your power. ...read more.

Von Bismarck says 1."Politics is not a science ... but an art". He was talking about the art of government. The making and enforcing of collective decisions. In other words making decisions and then using their powers to enforce these decisions. So Bismarck believed that government was involved in the exercising of political power. This can be seen in the UK government's domestic policy. Like the decision to close the countryside of to tourists due to the foot and mouth crisis. The decision to cull animals also shows the government exercising its political power. It used vets and the army to organise the mass killing of livestock. Whether the farmers agreed with the culling or not, their animals got killed if it was in an infected area. This shows that the government first took the decision in Westminster and used the right people to exercise this decision, whether people gave their consent or not. In other words they were exercising political power. An obvious area in which the government exercise its power is in law making. ...read more.