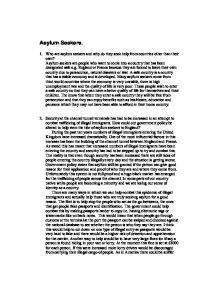 Asylum Seekers. 1. Who are asylum seekers and why do they seek help from countries other than their own? Asylum seekers are people who want to come into a country that has been designated safe e.g. England or France because they are forced to leave their own country due to persecution, natural disasters or war. A safe country is a country that has a stable economy and is developed. Many asylum seekers come from third world countries where the economy is very unstable, there is high unemployment rate and the quality of life is very poor. These people wish to enter a safe country so that they can have a better quality of life for themselves and their children. The know that when they enter a safe country they will be free from persecution and that they can enjoy benefits such as healthcare, education and pensions which they may not have been able to afford in their home country. 2. Security at the channel tunnel terminals has had to be increased in an attempt to combat trafficking of illegal immigrants. ...read more.

There are many ways in which we can help combat this epidemic of illegal immigrants and actually help those who are truly seeking asylum for a good reason. The first is to help stop the people who act as the go-betweens, the ones that get people fake passports and identification. The government could help combat this by making passports harder to copy i.e. having electronic tags or watermarks like on bank notes. This would mean that when people go through customs or the terminal at the port the passport can be swiped and checked against the national database to see whether the person is who they say they are. I think this would help to cut down on one type of illegal entry as passports would be very hard to fake and there would be a higher risk of detection and apprehension for the carrier. Another way to help would be to have very large fines for if say a person is found hiding in your van or lorry. At the moment this fine is set at �2000 for each person. ...read more.

working on public projects such as building hospitals and schools and maintaining roads. Many people would be put off by this as they would not want to complete this work and so would not attempt to come to our country but may perhaps choose another country to seek asylum in such as France or Germany. Another policy would be that they would have to find work when they came here, they would have to pay for their healthcare and housing etc. so that residents of our country would not have to pay for there being here. If they did not pay for their own privileges they would be deported back to where they came from. Even though some of these measures seem a little unorthodox in the long run I feel that even if the government did not adopt all of these policies, but only took up one the number of illegal immigrants trying to enter our country would lessen or slow down. Ultimately we do not want to seem racist or prejudiced we only want to retain the country, which is rightfully ours and no-ones else's. ...read more.