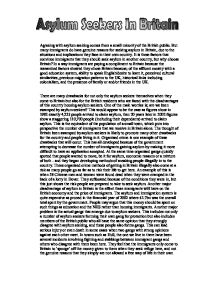 Agreeing with asylum seeking comes from a small minority of the British public. But many immigrants do have genuine reasons for seeking asylum in Britain, due to the situations and implications they face in their own country. It is these factors that convince immigrants that they should seek asylum in another country, but why choose Britain? In a way immigrants are paying a compliment to Britain because the researched factors showed they chose Britain because; of the affluent society with a good education system, ability to speak English/desire to learn it, perceived cultural similarities, previous migration patterns to the UK, historical links including colonialism, and the presence of family or and/or friends in the UK. ...read more.

Organised crime is one example of these drawbacks that will occur. This has all developed because of the government attempting to decrease the number of immigrants gaining asylum by making it more difficult to have an application accepted. At the same time organised gangs quickly spotted that people wanted to move, be it for asylum, economic reasons or a mixture of both - and they began developing methods of sneaking people illegally in to the country. These organised crime methods of getting in Britain illegally also come at a risk as many people go as far as to risk their life to get here. An example of this is when 58 Chinese men and women were found dead when they were cramped in the back of a lorry in Dover. ...read more.

This can lead serious injury or even death in some cases when two gangs with strong opinions against each other meet. In towns such as Hull, the one we live in there have been several incidents involving fighting and stabbings between immigrant gangs and others who disagree with them been here. They feel that the immigrants only come to Britain to 'sponge' off the money given to them when they seek refuge here, and not the genuine reasons that they simply are not allowed a free way of life in their own country. In a survey carried out 65% of people came to the conclusion that asylum seekers in Britain has directly resulted in an increased threat of terrorism in Britain. ...read more.