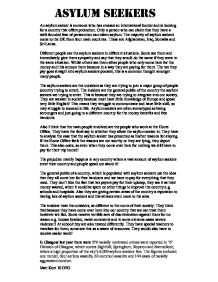 An asylum seeker is someone who has crossed an international border and is looking for a country that offers protection. Only a person who can claim that they have a well-founded fear of persecution can claim asylum. The majority of asylum seekers come to the UK from four main countries. These are Afghanistan, Iraq, Somalia and Sri Lanka. Different people see the asylum seekers in different situations. Some see them and immediately give them sympathy and say that they would do the same if they were in the same situation. Whilst others see them all as people who only come here for the money and this annoys them because in a way they are paying for them. The tax they pay goes straight into asylum seekers pockets, this is a common thought amongst many people. The asylum seekers are the outsiders as they are trying to join a major group of people (country trying to enter). The insiders are the general public of the country the asylum seekers are trying to enter. This is because they are trying to integrate into our society. They are weaker in society because most have little knowledge of Europe and speak very little English! This means they struggle to communicate and have little skill, so may struggle to succeed in life. Asylum seekers are often stereotyped as being scroungers and just going to a different country for the money benefits and free handouts. ...read more.

People have the stereotypical views on asylum seekers, as it is a well-known fact that tax pays for everything that the asylum seekers needs. We pay for food, accommodation, health service and clothes. Also some feel that any person that is Muslim is a terrorist. This blatantly is not true, but some still carry on believing this! I think that the asylum situation is progressively getting worse as more and more are going to be coming to Europe. I feel that the real problems will come when all the bad jobs are taken and they start taking the well-paid jobs. This will anger many people because if they weren't there they would have got the job!! There are many reasons why asylum seekers come to the UK here are some of them: o The principal aim of asylum seekers is to reach a place of safety. o Asylum seekers choosing the UK did so because of the presence of relatives or friends; their belief in the UK as a safe, tolerant and democratic country, links between their own country and the UK including their ability to speak English or desire to learn it. o Agents played a key role in channelling the asylum seekers to particular countries. Some asylum seekers had no choice and were sent to particular countries by their agent. ...read more.

I might have found a special website with the timeline or printed in a book. The information was accurate as I felt I used reliable sources and good books. Some of the information may have been extreme cases and be over biased. I think that the main view that people had was that we are paying for them and they didn't like that. I mentioned that on several occasions throughout the assignment. The information may have been biased because the people that wrote the book may have included some of their own views. Using the Internet searching for information was hard because when searching on a site mainly press stories where coming up I had to find a special site dedicated to highlighting issues concerning asylum seekers! To improve my essay I could have used a wider variety of sources e.g. more books. Some of the information that I used may have been biased because my opinions are slightly biased. Also some of the websites I used may have been biased also. Whilst trying to do my research on the net I struggled to find many asylum seeker websites. All the ones I found were about how to claim asylum. To make this assignment better I would have tried to find an asylum seeker in Leicester an interview him/her. This would give me a primary source of evidence and would be able to tell me his story. This assignment has been a good eye opener for me. Matt Kent 10 DPO ...read more.