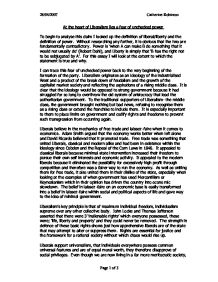 At the heart of Liberalism lies a fear of unchecked power.

At the heart of Liberalism lies a fear of unchecked power To begin to analyse this claim I looked up the definition of liberal/liberty and the definition of power. Without researching any further, it is obvious that the two are fundamentally contradictory. Power is 'when A can make B do something that it would not usually do' (Robert Dahl), and Liberty is simply that 'B has the right not to be subjugated by A'. For this essay I will look at the extent to which the statement is true and why. I can trace this fear of unchecked power back to the very beginning of the formation of the party. Liberalism originates as an ideology of the industrialised West and a product of the break down of feudalism and the growth of the capitalist market society and reflecting the aspirations of a rising middle class. It is clear that the ideology would be opposed to strong government because it had struggled for so long to overthrow the old system of aristocracy that lead the authoritarian government. To the traditional supporters of Liberalism- the middle class, the government brought nothing but bad news, refusing to recognise them as a rising class or extend the franchise to include them. ...read more.

Liberals support universalism, that individuals everywhere possess common universal features and are of equal moral worth, they therefore disapprove of social privileges. Even though we are now living in a far more meritocratic society, I believe that the same resent and mistrust of those in power still exists, as generally those in power are seen to be from a rich aristocratic background and good education, etc. Anarcho-liberals are so anti-government that they come close to proposing to abolish it altogether. The state is the being that wields power. Classical liberalism has a negative attitude towards the state and government and proclaims that the state is 'at best, a necessary evil'. The reason for Classical Liberals being so anti-government is because they are far more libertarian than modern Liberals, and they place more emphasis on freedom. They do not see any way in which the state can exist without infringing on their freedoms but recognises the need for it to maintain law and order. Lord Acton said "absolute power corrupts absolutely", he holds a very negative view of government which is shared by many other Libertarians. They feel that any government with political power will automatically defend the institution because it got them into power and will support the higher classes over the lower classes because they depend on them for political and financial support. ...read more.

Rousseau proclaims direct democracy as the only fair way to rule and preserve our liberty simultaneously. Locke proclaims the existence of a social contract between the governed and the governing. To Locke the government is a purely representative body and we sustain the right to replace, by any means necessary, any government which is not appropriately representing the people. I agree with the statement completely when analysing the stance of the Classical Liberals but not so with the Modern Liberals. Modern Liberals have evolved past the suspicious and negative view of the state and are much more willing to grant government intervention. They have even toned down their emphasis on freedom, replacing it with the idea of positive liberty, that freedoms can be breached if it is for our own good, or the good of the majority. On the other hand, all of the beliefs within Classical liberal ideology can be traced back to a fear of unchecked power; need for constraints on the running of government, laissez-faire and free-trade policies. These in turn can be traced to a need for freedom. This relates back to my point at the beginning of this essay that power and liberty are fundamentally contradictory. 28/04/2007 Catherine Robinson Page 1 of 3 ...read more.