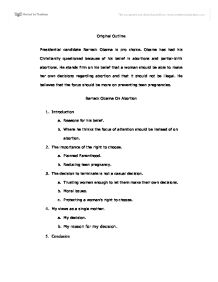 Original Outline Presidential candidate Barrack Obama is pro choice. Obama has had his Christianity questioned because of his belief in abortions and partial-birth abortions. He stands firm on his belief that a woman should be able to make her own decisions regarding abortion and that it should not be illegal. He believes that the focus should be more on preventing teen pregnancies. Barrack Obama On Abortion 1. Introduction a. Reasons for his belief. b. Where he thinks the focus of attention should be instead of on abortion. 2. The importance of the right to choose. a. Planned Parenthood. b. Reducing teen pregnancy. 3. The decision to terminate is not a casual decision. a. Trusting women enough to let them make their own decisions. b. Moral issues. c. Protecting a woman's right to choose. 4. My views as a single mother. a. My decision. ...read more.

Barrack Obama believes that abortions should be legally available in accordance with Roe v. Wade. The central holding of Roe v. Wade was that abortions are permissible for any reason that a woman chooses, up to the point the fetus becomes able to live outside of its mothers' womb. Obama believes that a woman should be trusted to make the decision of whether or not to have an abortion in conjunction with their doctors and their families and their clergy. He believes that the focus should be more on preventing teen pregnancies. He believes in educating teens on pregnancy and the importance of abstinence. Obama believes that focusing on reducing teen pregnancy should be at the forefront. He wants to teach teens about abstinence and contraception. He believes in age-appropriate education and the expansion of access to contraception to reduce unintended pregnancy. Obama feels that reducing abortions can be done by effectively educating teens. ...read more.

I was not ready to have a child when I found out I was pregnant. Although I am pro choice for everyone else, I could never have an abortion. I felt I would have been not only killing my child but also a part of me. My friends and family members that have had abortions have had difficult times including night mares after their abortions. I don't think I could have handled all of that and I decided to keep my baby. It has been a constant struggle but she is the joy of my life. I still stand firmly behind a woman's right to choose. In conclusion, Obama stands firm on his support of pro-choice. He believes by effectively educating teens we can reduce teen pregnancy, in turn, reducing abortion. He also believes that we should always trust a woman enough to make her own moral decision about abortion. Obama believes that a woman's right to choose should always be protected. ...read more.