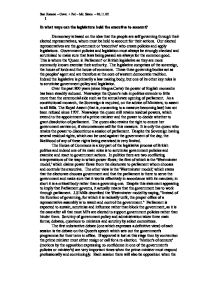 In what ways can the legislature hold the executive to account? Democracy is based on the idea that the people are self governing through their elected representatives, whom must be held to account for their actions. Our elected representatives are the government or 'executive' who create policies and apply legislations. Government policies and legislation must always be strongly checked and scrutinised to make sure that laws being passed are always for the common good. This is where the 'Queen in Parliament' or British legislative as they are more commonly known exercise their authority. The legislative comprises of the sovereign, the house of lords and the house of commons. These three governing bodies act as the peoples' agent and are therefore at the core of western democratic tradition. Indeed the legislative is primarily a law making body, but one of its other key roles is to scrutinise government policy and legislation. Over the past 800 years (since Magna Carta) the power of English monarchs has been steadily reduced. Nowadays the Queen's role in politics extends to little more than the ceremonial side such as the annual state opening of parliament. As a constitutional monarch, the Sovereign is required, on the advice of Ministers, to assent to all Bills. The Royal Assent (that is, consenting to a measure becoming law) has not been refused since 1707. Nowadays the queen still retains residual powers, which extend to the appointment of a prime minister and the power to decide whether to grant dissolution of parliament. The queen also retains the right to ensure her government carries on, if circumstances call for this measure. ...read more.

On a Monday, Tuesday, Wednesday and Thursday minister's answer MPs questions during 'Question Time.' The prime minister's is asked questions every Wednesday when the house is sitting. There are two different types of questions, which are called starred and unstarred. Starred questions are oral questions, which are asked face to face. The advantages of starred questions are that they attract publicity and that supplementaries can also be asked (for which a minister can have no warning and can therefore be caught off guard), while the disadvantage is that there is never the time to answer all the questions, but nevertheless the MP must stay in their place in case their name is called out at some point. Unstarred questions require written answers which require the minister in question to publish their written answer in Hansard - on average there are roughly three times more written answers than non-written, and despite the disadvantages of not having the same levels of publicity attached to them they do have the advantage of generally being longer and more involved. MPs can use question time as a way of revealing government intentions and also to raise grievances, which may have arose in their constituencies. Despite question time being a seemingly priceless way of holding the executive to account, many would argue that in fact it is not quite the tool that it is perceived to be for MPs. Firstly, the UK does not have a system of open government, the consequence being that due to the 'Official Secrets Act 1989' it is an offence to disclose or obtain wide categories of government information. ...read more.

Despite this the House of Commons will usually allow the Lords to amend bills concerning financial matters. Unlike the Commons the Lords does not have any control over the term of the Prime Minister or government. While the Lords has been made more representative with the removal of most hereditary peers, creating a situation whereby no party has overall control, every time it flexes its muscles, the government dismisses it for being unelected. Some would say that we need a second chamber which can effectively scrutinise and delay legislation based on a proper system of checks and balances and that the Lords is not it. As I hope I have demonstrated there are a number of ways in which the legislature can hold the executive to account, but all of which come with their pitfalls, respectively. The Queen's residual powers to hold the government to account seem impressive in theory, but in practice they would never work. The House of Lords along with committees have that extra time to fully check and scrutinise policy and administration, but unfortunately their efforts are often in vain. It is the House of Commons which holds the full bulk of the power, and rightly so as it is an elected body, which has been put their by the people, us. However, could it be that there are not sufficient checks in place to stop the executive from passing any legislation it chooses; after all it is the case that the powers of the upper house have been stripped bare over the last century. What I think is clear is that although the means for sufficient scrutinisation are in place the extent to which these means are exercised are somewhat lacking. ...read more.