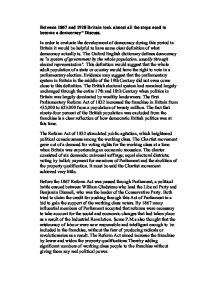 Between 1867 and 1928 Britain took almost all the steps need to become a democracy&quot; Discuss.

Between 1867 and 1928 Britain took almost all the steps need to become a democracy" Discuss. In order to evaluate the development of democracy during this period in Britain it would be helpful to have some clear definition of what democracy actually is. The Oxford English dictionary defines democracy as "a system of government by the whole population, usually through elected representation". This definition would suggest that the whole adult population of a state or country would have the right to vote in a parliamentary election. Evidence may suggest that the parliamentary system in Britain in the middle of the 19th Century did not even come close to this definition. The British electoral system had remained largely unchanged through the entire 17th and 18th Century when politics in Britain was largely dominated by wealthy landowners. The first Parliamentary Reform Act of 1832 increased the franchise in Britain from 435,000 to 653.000 from a population of twenty million. The fact that ninety-four percent of the British population was excluded from the franchise is a clear reflection of how democratic British politics was at this time. The Reform Act of 1832 stimulated public agitation, which heightened political consciousness among the working class. The Chartist movement grew out of a demand for voting rights for the working class at a time when Britain was experiencing an economic recession. ...read more.

The universities of Manchester, Liverpool and Durham all followed suit within seven years of London University's example. By providing a proper level of education for women, it opened up new career opportunities, such as nursing, medicine and teaching, but to follow the latter career choice women had to remain unmarried. Women also found employment in the post office and civil services. Although, women's status was beginning to improve, they were still denied the right to vote. When John Stuart Mill's proposal was defeated in the House of Common, it was the beginning of a long and b from itter campaign for women to gain the right to vote. In 1867, the London's National Society for Women's Suffrage organised a petition, the main purpose of this petition was to have women voting rights included in the 1867 Reform Act. In the later part of the 19th century the National Union of Women's Suffrage was set up. It hoped to win the support of various M.P.s by drawing up petitions and producing pamphlets, but this accomplished very little. In 1903, the Women's Social and Political Union was set up by Emmeline Pankhurst. In the quest for equal suffrage with men, the W.S.P.U. had used more or less the same as the tactics as N.S.W.S. by means of partitions and campaigning. ...read more.

But evidence would suggest that Britain did not become a proper democracy until 1928 when the (Equal Franchise Act) second Representation of the People Act extended the franchise to both men and women over the age of twenty-one, which extended the franchise to 97% of the British population. By 1928 Britain had to all of the necessary steps to be classed as a true democracy which radically changed Britain's political identity in the process. In conclusion, the expansion of the franchise only increased to 28.5% between 1867 and the out break of the First World War. The most dramatic growth in democracy took place after the First World War when the Representation of the People Act of 1918 increased the franchise to 74% by giving the vote to women over the age of thirty and all men over the age of twenty-one. The Equal Franchise Act of 1928 increased the franchise in Britain to 97% of the population by giving the vote to all men and women over the age of twenty-one. Evidence may suggest that Britain could be classed as a true democracy after 1928. The rise of the Labour Party and the growth of the TUC and the emergence of the Labour Party helped to change the political identity of British politics. The dramatic extension of the franchise between 1918 and 1928 also had a major impact on British politics because politicians had to be much more aware of public opinion when shaping their policies. ...read more.