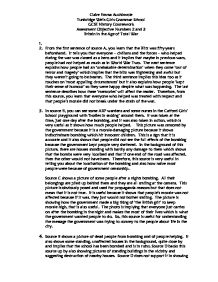 1. 2. From the first sentence of source A, you learn that the Blitz was fifty years beforehand. It tells you that everyone - civilians and the forces - who helped during the war was classed as a hero and it implies that maybe in previous wars, people had not helped as much as in World War Two. The next sentence explains how people had an 'unshakable determination' when they came 'out of terror and tragedy' which implies that the blitz was frightening and awful but they weren't going to be beaten. The third sentence implies this idea too as it touches on 'most appalling circumstances' but it also explains how people 'kept their sense of humour' so they were happy despite what was happening. The last sentence describes how these 'memories' will affect the reader. Therefore, from this source, you learn that everyone who helped was treated with respect and that people's morale did not break under the strain of the war. 3. In source B, you can see some ARP wardens and some nurses in the Catford Girls' School playground with 'bodies in sacking' around them. It was taken at the time, just one day after the bombing, and it was also taken in action, which is very useful as it shows how much people helped. ...read more.

The source suggests that the panic was infectious as 'when the siren goes, people run madly for shelters' which was not good. It implies that the East End was heavily bombed as 'Exodus from the East End growing rapidly'. The Government did not want that happening because once people left, they might not come back to work and help with the war effort. This is backed up by Source G, which explains that the economic life is important for making 'planes, tanks and armaments'. If the government did not keep the morale high, then people would not help with the war effort and the government would lose support. If the government lost support, then it would be overthrown and Britain would have had to pull out of the war. Source F does not talk of the panic but of the low morale and despondency. It describes how the people in the East End were so fed up with all the bombing 'that even the King and Queen were booed'. This shows that people were losing faith in Britain and are supposed to be cheered up by seeing the King and Queen, as they are a patriotic symbol. Also, if the people lose faith in the monarchy, maybe they would lose faith in the government. 6. ...read more.

looting or of the crime rate, which jumped in 1940 and remained high throughout the war.' Something else in support of the statement is the Black Market, which had a brilliant trade from the rich who wanted to be one over on everyone else. However, not in favour of the statement was the view of rationing. This was widely accepted as it was seen as everyone getting their fair share of what little there was showing that everyone was united. Also, throughout the war, people stayed happy and 'everyone was having a real old sing-song.' People made up jokes like 'more open than usual' to lighten up the atmosphere when someone's shop front had been blown up and when someone's house got bombed, everyone helped. One last point that contradicts the statement is that there were no major political parties trying to campaign to pull out of the war - they were all united. This possibly shows that all the political parties believed in Britain and that they had enough courage and determination to last and that weather they won or lost, they had done their best. ?? ?? ?? ?? Claire Emma Auchinvole Tunbridge Wells Girls Grammar School GCSE History Coursework Assessment Objective Numbers 2 and 3 Britain in the Age of Total War ...read more.