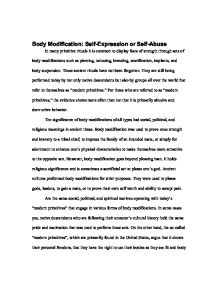 Body Modification: Self-Expression or Self-Abuse In many primitive rituals it is common to display feats of strength through acts of body modifications such as piercing, tattooing, branding, scarification, implants, and body suspension. These ancient rituals have not been forgotten. They are still being performed today by not only native descendants but also by groups all over the world that refer to themselves as "modern primitives." For those who are referred to as "modern primitives," the evidence shows more often than not that it is primarily abusive and destructive behavior. The significance of body modifications of all types had social, political, and religious meanings in ancient times. ...read more.

On the other hand, the so-called "modern primitives", which are primarily found in the United States, argue that it shows their personal freedom, that they have the right to use their bodies as they see fit and body modification demonstrates their control. It is also said to be an artistic expression of oneself and or a political or religious statement. However, most of the members of these groups are thought to have self-esteem problems or lack of family guidance. It is clear that the body modification may just be an excuse for their failure to cope problems and stresses of society today. Does the government have a legitimate role in policing people who engage in body modification? ...read more.

If it's not okay for someone to shoot their friend in the stomach if their friend wants to know how it feels, than what makes it okay for someone to suspend and help mutilate another with their consent. It is harming a human being and should be outlawed. Body Modification has been around for centuries and in some culture is considered to be an amazing experience and those who performed it are held in the highest respect. There are people however, who have a false appreciation for it. It is used as an excuse for their problems and inability to cope with life. There is an art of beauty and talent in some of these modifications but the disturbing mutilations seem to out number them. ...read more.