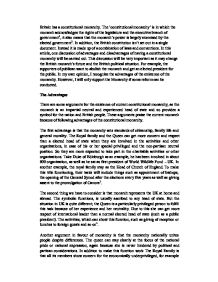 Many tourists came to Britain for this reason; they can watch a live of the monarch's life. On the other hand, the country like China, there is no more empire exists but empire's palace. Without the participation and activities of monarchy, there is also a lack of participation and activities to tourist compare with British one. The Royal prerogative can add legitimacy to the Parliament. 'As England's oldest secular institution, it is intertwined with the nation's identity and political culture.ii' In history, the development of Parliament is close connected with the delegation of the power from the Crown, so the Royal prerogative can add legitimacy to the Parliament. The activities such as opening of Parliament, regular visit to the Palace by the leader of the largest party, show this function and formal power of British Monarchy. Another argument in favour of monarch is that the Queen's long knowledge and experience is invaluable to prime ministers. As John Major mentioned in his recent article in the Telegraph Daily: The Monarchy has seen many overtake of one partisan government by another one, this make them very experienced and neutral than an elected politician as the head of state. Monarchy still remains some popularity in the modern society as the history last. Example by some of the Monarchy members has a good looking. ...read more.

August 1997: Diana is killed in a Paris car crash, along with companion Dodi Fayed, son of Egyptian-born businessman Mohamed Al Fayed, who alleges a conspiracy. The royal family also comes under heavy fire for a cool reaction to the episode. 8,9. Another view against Monarchy is that the redundant and server no purpose. The reason for this can be regard from what The development of Monarchy mentioned: Take royal ascent as example, the actions of monarchy is predictable, where there is no power and their personal choices get involved. The final argument against Monarchy could ascribe to their expensive cost. The anti-Monarchy group argues that Royal Family is surrounded by expensive pomp that is entirely unnecessary and anachronistic, which the elected president won't cost so much. In addition, most of money is needed to pay by taxpayer. Currently, according to the civil list, the cost are fixed at 7.9 millions per year. Conclusion: Whether to say there are more advantages or disadvantages for having a constitutional Monarchy in Britain, it depends on various factors. To conclude, there are many advantages for the continuity of the Monarchy. Most of these advantages are due to the historical and traditional backgrounds of the Monarchy, as well as its neutral and experienced role in the politics. On the other hand, the privilege given to the Monarchy is seemed to be bad for the more equal and democratic Britain. ...read more.