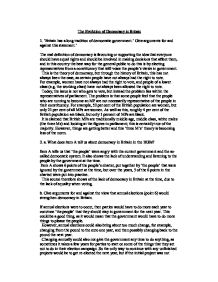 The Evolution of Democracy in Britain 1. 'Britain has a long tradition of democratic government.' Give arguments for and against this statement.' The real definition of democracy is favouring or supporting the idea that everyone should have equal rights and should be involved in making decisions that affect them, and in this country the best way for the general public to do this is by electing representatives from a constituency that will voice the people's views in government. This is the theory of democracy, but through the history of Britain, this has not always been the case, as certain people have not always had the right to vote. For example, women have not always had the right to vote, and people of a lower class (e.g. the working class) have not always been allowed the right to vote. Today, the issue is not who gets to vote, but instead the problem lies within the representatives of parliament. ...read more.

This could be a good thing, as it would mean that the government would have to do more things to please the people. However, annual elections could also bring about too much change, for example, changing from the pound to the euro one year, and then possibly changing back to the pound the next year. Changing annually could also not give the government any time to do anything, as sometimes it takes a few years for parties to start on some of the things that they set out to do in their election campaign. So the only way to continue with any unfinished projects would be to get re-elected the next year, but if the initial project was not completed, then they are more unlikely to be re-elected for failing to keep to their election campaign promises. But on the other hand, annual elections would theoretically reduce bribery, as it would be very hard to buy a different party or the same party) ...read more.

This person will represent their constituency in parliament, but the problem is that the majority of these representatives (MPs) follow the three Ms (middle age, middle class, white men). As item C rightfully points out, men cannot always represent the best interests of women, and 52 per cent of the population are female, but only 21 per cent of MPs are female. The same is the case with the black population of Britain, who at the moment stand at roughly 4 per cent but there are only about 1 per cent of black MPs. b. How might the extension of the franchise lead to greater democracy? The extension of the franchise means that more people have the right to vote, so that more people should theoretically have a greater say in the way the country is run. The more people that vote means that there will be more views and opinions being expressed by a wider diversity of the British public, so theoretically, the MPs elected reflect the views, opinions and political needs of the constituency. ...read more.