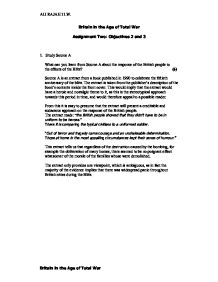 Britain in the Age of Total War.

Britain in the Age of Total War Assignment Two: Objectives 2 and 3 1. Study Source A What can you learn from Source A about the response of the British people to the effects of the Blitz? (6) Source A is an extract from a book published in 1990 to celebrate the fiftieth anniversary of the blitz. The extract is taken from the publisher's description of the book's contents inside the front cover. This would imply that the extract would have a heroic and nostalgic theme to it, as this is the stereotypical approach towards this period in time, and would therefore appeal to a possible reader. From this it is easy to presume that the extract will present a creditable and audacious approach on the response of the British people. The extract reads: "the British people showed that they didn't have to be in uniform to be heroes." There it is comparing the typical civilians to a uniformed soldier. "Out of terror and tragedy came courage and an unshakeable determination. Those at home in the most appalling circumstances kept their sense of humour." This extract tells us that regardless of the destruction caused by the bombing, for example the obliteration of many homes, there seemed to be no poignant effect whatsoever of the morale of the families whose were demolished. ...read more.

Damage can be seen in several ways. There can be physical damage, damage to morale, deaths and casualties. Between Sources D and B there are similarities in each aspect of damage. Firstly, both of these sources show damage to buildings and destruction in the scene. Both of them show complete destruction of a physical type of morale. They depict ruins of buildings and also the element of death and casualties. Source D and B were both not published at the time they were taken, which may suggest that they show a very true picture of the damage done during the Blitz, this is because they were both banned by the censors. This meant that the scenes they depict are too graphic. For morale, Source D and Source B both show people who are very serious and in a way unhappy. However, Source C does not support the other sources in this way, because it shows a group of people with their thumbs up and smiling, this suggest a sense of pretence and not really pragmatic. Source D and Source B also show death and casualties whereas Source C does not. 4. ...read more.

The tube stations were popular at first but the government was apprehensive that people would trap themselves down their thorough fear of never coming out. Source G illustrates the men and women of Britain working in the countries economic life then meeting the Blitz. This puts fear in the minds of people and could have caused an economic collapse. The government was concerned about the effects of the bombings. Many people began "trekking" moving away from the city. This is what the government was concerned about, people failing to turn up for work as many moved to the countryside: "there was widespread fear during the Blitz/ Londoners escaped to Epping Forest during the bombing of the East End". But in fact many of the trekkers did arrive to work everyday, from places like Epping Forest. Attendance at work remained surprisingly good. 5. Study all the Sources and use your own knowledge The impression that the British faced the Blitz with courage and unity is a myth. Use the sources, and your own knowledge, to explain whether you agree with this statement. (14) ALI RAJAH 11.W. Britain in the Age of Total War ...read more.