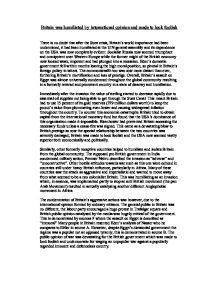 Britain was humiliated by international opinion and made to look foolish after the Suez crisis.

Britain was humiliated by international opinion and made to look foolish There is no doubt that after the Suez crisis, Britain's world importance had been undermined, it had been humiliated at the U.N general assembly and its dependence on the USA was now completely evident. Socialist Russia now seemed triumphant and omnipotent over Western Europe while the former might of the British economy now looked weak, impotent and had plunged into a recession. Eden's domestic government fell within months leaving the high moral position, so pivotal in Britain's foreign policy in tatters. The commonwealth too was now more distant than ever, furthering Britain's mortification and loss of prestige. Overall, Britain's assault on Egypt was almost universally condemned throughout the global community resulting in a formerly revered and prominent country in a state of disarray and humiliation. ...read more.

Other hostile attitudes towards war such as this one were echoed in countries still under heavy British influence, particularly in Africa. Many of these countries saw the attack as aggressive and imperialistic and wanted to move away from what seemed to be a neo colonialist Britain. This was humiliating as an invasion which, in essence, was implemented partly to stop an anti British movement (the pan Arab Movement) resulted in actually catalysing another different Anglophobic movement in Africa. The condemnation of Britain's aggressive actions was however, due to the international opinion formed by ordinary citizens. The general public in Britain was no different, the labour party encouraged a huge protest in Trafalgar square and British public opinion catalysed by the media was hugely critical of the government. This is demonstrated by sources F where the assault on Egypt is described as "immoral" Many people in Britain resented Eden's analysis of Nasser who he compares to Hitler in source A. ...read more.

A quote from Sir Pierson Dixon Britain's representative at the U.N demonstrates how costly and humiliating military intervention in Egypt proved to be: 'At the time I remember feeling very strongly that we had, by our actions reduced ourselves from a first to a third class power'. Thus demonstrating that Britain was now firmly behind the USA and USSR and now had to accept it's knew position and role within the international community. In conclusion the Suez crisis was a complete disaster for Britain leading it to succumb to a new world order in which the superpowers were to dominate. After the invasion it was clear that Britain was never going to maintain its empire and in my opinion decolonisation in the sixties was made easier because of the events of 1956. Overall I agree with this statement as Britain looked like it was returning to its older imperial ways, it was humiliated in the U.N and the British public opinion made Eden's government look undemocratic to an outside observer ...read more.