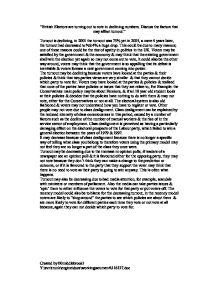 British Electors are turning out to vote in declining numbers. Discuss the factors that may affect turnout.&quot;

"British Electors are turning out to vote in declining numbers. Discuss the factors that may affect turnout." Turnout is declining, in 2001 the turnout was 75% yet in 2005, a mere 4 years later, the turnout had decreased to %9.4% a huge drop. This could be due to many reasons; one of these reasons could be the rise of apathy in politics in the UK. Voters may be satisfied by the government & the economy & may think that the existing government shall win the election yet again so may not come out to vote, it could also be the other way around, voters may think that the government is so appalling that its defeat is inevitable & voters foresee a new government coming into power. ...read more.

The electoral system is also old fashioned & voters may not understand how you have to register or vote. Other people may not vote due to class dealignment. Class dealignment can be explained by the reduced intensity of class consciousness in this period, caused by a number of factors such as the decline of the number of manual workers & the rise of in the service sector of employment. Class dealignment is perceived as having a particularly damaging effect on the electoral prospects of the Labour party, which failed to win a general election between the years of 1979 & 1997. It may decrease because of class dealignment because there is no longer a specific way of telling what class you belong to therefore voters using the primacy model may not feel they are no longer a part of the class they once were. ...read more.

This is often what happens. Turnout may also be decreasing due to bad media attention, for example, scandals with ministers or members of parliament. Also the media can take parties issues & 'spin' them to either influence the voters to vote for that party or put voters off. The recency model could also be to blame for the decreasing turnout, in the recency model voters are likely to "shop around" the parties to see which policies are about them & are more likely to vote for different parties each time they vote or not vote at all because, again they can not decide which party to vote for. ?? ?? ?? ?? Created by 00middlebrookl N:\Politics\British Electors are turning out to vote in declining numbers.doc ...read more.