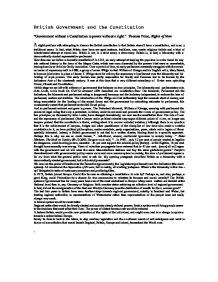 British Government and the Constitution "Government without a Constitution is power without a right." Thomas Paine, Rights of Man A slight problem with attempting to discuss the British constitution is that Britain doesn't have a constitution, not in any traditional sense. In fact, what Britain does have are aged customs, traditions, man-made religious beliefs and a kind of indoctrinated attempt at moral law. Britain is not, in a strict sense, a democracy. Britain is, in fact, a Monarchy with a democratically elected representative parliament. How then can we define a domestic constitution? In 1215, an early attempt at keeping the populous in order found its way into national history in the form of the Magna Carta, which was soon discarded by the powers that were as unworkable, leaning heavily as it did on Godly conviction. Over a period of time, an early parliament constantly struggled with the crown on issues of supremacy until in 1688, a group of seven Whigs invited William of Orange and his English wife, Mary Stuart, to become joint rulers in place of James II. ...read more.

The two principles, as discussed by John Locke, have changed dramatically, we now see the constitution thus: The rule of Law and the supremacy of parliament. (But a lawyer and a political scientist may argue different points of view, no longer can lawyers pretend that the constitution is theirs, writing about it in narrow-minded isolation.) Although there is no question that it is the achievement of lawyers, Judges and other practitioners of the discipline of law have also made a notable contribution to it, as have political philosophers, controversialists, party organizations, peers, rebels and a legion of those specially interested. Indeed, a British government is not tied to a written charter, binding them to a specific approach. Perhaps this is why we see so much brazen, "...left-liberal, amoral, conformist ignorance in society today..." Peter Hitchens, The Mail on Sunday 08-12-2002. He goes on to add, "...In 1983...only 12 per cent of people wanted to legalise the dangerous, mind bending poison, cannabis...41 per cent support this suicidal policy [today]...in the Eighties, 70 per cent thought homosexuality was wrong. ...read more.

Many more matters are decided at the National level than in, say, Germany or Belgium. Both member states achieving an effective level of regional government. In fact, did not the amalgamation of the East and West (in Germany) see the distribution of wealth for the common good? The last four years in Britain have seen hesitant steps towards regional government, notably in Scotland and Wales, but treating regional authorities as representatives of Westminster rather than representatives of the people does not really change very much. A federal system would be much better. Regional authorities would be directly elected and exercise clearly defined powers. Such a system would bring people nearer to the decisions that most affect their lives. The power of distant bureaucrats would be reduced. A federal Britain would provide new protection of the rights of the individual, and might even lead to a change in opinion towards a united federal Europe. Surely its time to look to the future, to stop needless legislation and the continued march of self-indulgence and work in favour of a constitution that would benefit England, Britain, Europe and indeed, humankind the World over. Scrotum ...read more.