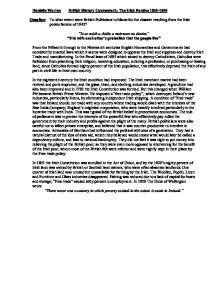 Danielle Warren British History Coursework: The Irish Famine 1845-1849 Question: To what extent were British Politicians to blame for the disaster resulting from the Irish potato famine of 1845? "Is ar sc�th a chi�le a maireann na daoine" "It is with each other's protection that the people live" From the Fifteenth through to the Nineteenth centuries English Monarchies and Governments had consistently enacted laws which it seems were designed to oppress the Irish and suppress and destroy Irish Trade and manufacturing. In the Penal laws of 1695 which aimed to destroy Catholicism, Catholics were forbidden from practicing their religion, receiving education, entering a profession, or purchasing or leasing land; since Catholics formed eighty percent of the Irish population, this effectively deprived the Irish of any part in civil life in their own country. In the eighteenth century the Irish condition had improved: The Irish merchant marine had been revived and ports improved, and the glass, linen, and clothing industries developed. Agriculture had also been improved and in 1782 the Irish Constitution was formed. But this changed when William Pitt became British Prime Minister. He imposed a "free trade policy", which destroyed Ireland's new industries, particularly linens, by eliminating independent Irish shipping. A condition of "Free trade" was that Ireland should not trade with any country where trading would clash with the interests of the East India Company; England's mightiest corporation, who were heavily involved particularly in the lucrative trade with India. This was typical of the British belief in protectionist economics. The role of parliament was to protect the interests of the powerful few who effectively pay rolled the government by their industry and profits against the plight of the many. British politicians were also careful not to affect private enterprise, and believed that it was counter-productive to interfere in economics. Advocates of Bentham had influenced the political attitudes of a generation. They had a natural distrust of the idea of state aid, which they believed would create what would later be called a dependency culture, and lead to national bankruptcy. ...read more.

of the Irish was worse than that of slaves in the Americas; In the American plantations on Rhode Island, black slaves had a saying: "If a negro was not a negro, Irishman would be negro" Even though the government was pre-warned of the disaster waiting to happen, their efforts to relieve the famine, such as they were, were entirely futile, and bound by the free trade policy; this determined that no money should be spent on infrastructure projects which would benefit the Irish, such as drainage, harbours, fisheries and railways. These were amongst the first urgent proposals made by a committee of Irish citizens in 1845 to the government of Sir Robert Peel. Other proposals doomed to failure were: to stop the export of corn and distilling of grain into spirits, to set up relief committees funded in part by a ten percent tax on landlords; higher in the case of absentee landlords, and in part by a one and a half million pound, ten year British loan. The only proposal which was not ignored by Peel was that duties should be removed on food imports. This he agreed to because it would make the import of Irish corn into Britain easier. Peel did buy $100,000 of Indian corn and meal from the USA for the relief of the famine, which may seem a considerable gesture, however since the crop loss was �3.5 million, this was a wholly inadequate amount to ease suffering, and this corn and meal was not immediately distributed either. It was stored in military lockups and used only to as a leverage stock to prevent the over-fast rise in the market price of foodstuffs. �365,000 of government grants were also given to help Ireland through the first year, and the formation of relief committees to propose public works was allowed, but without any British funds, they relied on charitable donations. ...read more.

the Laissez faire attitudes of the British at the time, and the situation became considerably worse when Lord John Russell became Prime Minister, because of the slavish adherence to free trade and the interests of the entrepreneur. Lord Russell would never have conceived of interfering with the structure of the British and Irish economies in ways which would have been necessary to prevent the worst effects of the famine. Hoppen's view is rather ill-framed; why does he consider so little more could have been achieved by the same state system had there been a will to take efficient generous and effective action rather than resorting to the utopian " authoritarian state committed to the welfare of the poor at all costs" ? I agree that a state hampered by the prejudices and the vested interests of those in power and controlling commerce, such as existed at the time, could do little to help the situation of the poor, but I find his "solution" rather glib. In conclusion it is my contention that British politicians were more widely to blame for the disaster resulting from the Irish potato famine than may be thought, because rather than looking at the actions or omissions of the contemporary politicians, we must take into consideration that after nearly seven hundred years of attempted domination, the British oppression of the Irish had deprived them of all but the bare necessities of survival, and caused such destitution that when the potato famine struck, the poor could not avoid the worst privations, given the social and political conditions controlling their lives. The British government's ineffectual attempts at relieving the situation played a major role in worsening the situation; they allowed prejudice and State and individual self-interest, economic and religious dogma to subjugate even the least consideration for humanity. Ultimately British politicians bear considerable blame because they were not prepared to allocate what was needed to head off mass starvation, and they as the parent government did nothing to protect its subject people. ...read more.