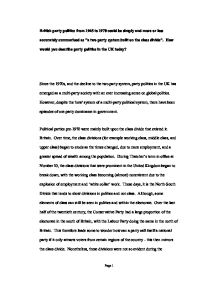 British party politics from 1945 to 1970 could be simply and more or less accurately summarised as "a two party system built on the class divide". How would you describe party politics in the UK today? Since the 1970s, and the decline to the two party system, party politics in the UK has emerged as a multi-party society with an ever increasing sense on global politics. However, despite the 'new' system of a multi-party political system, there have been episodes of one party dominance in government. Political parties pre-1970 were mainly built upon the class divide that existed in Britain. Over time, the class divisions (for example working class, middle class, and upper class) began to erode as the times changed, due to more employment, and a greater spread of wealth among the population. During Thatcher's term in office at Number 10, the class divisions that were prominent in the United Kingdom began to break down, with the working class becoming (almost) ...read more.

During the Conservative's victory in 1979 and the Labour landslide victory in 1997, people went against their previous convictions and followed the winner mainly due to the pledges made in the parties manifesto. Up until the 1970s, the electorate held a sense of loyalty and feeling with one of the main parties (Conservative or Labour). Today, this exists to a degree, but it is not as dominant as it once was. In twenty first century Britain, the electorate has become a lot more wary of politicians and of political parties objectives, which leads to voter apathy. In the last few decades, a number of new political parties have emerged, mainly from factions or over disagreements within the bigger parties (those being the Conservative and Labour Parties) or out of nationalism or the desire for devolution. Such parties include the Green Party, the Social Democratic Party (SPD), UK Unionist Party, Scottish Nationalist Party and Plaid Cymru (Welsh National Party). ...read more.

When New Labour emerged in 1996/1997, they had revamped the whole party leaving behind the days of Old Labour (along with the factions and shackles of deep trade union links) bringing forward a 'new' political party for the twenty first century. Which would prove to be a highly effective opposition party, and 'stabilise' government in Britain. At the same time as this, the Scottish Nationalist Party and Plaid Cymru were developing their own forms/styles of devolved government form Westminster. This began to change the face of British politics (and indeed the constitution) in a way it had never been changed before. In conclusion, British politics today is varied, but once again it is dominated by one party (the Labour Party). The question is, how long can the Labour Party stay in power? Will the new Leader of the Opposition (Michael Howard) prove to be an effective opposition? ?? ?? ?? ?? Page ...read more.