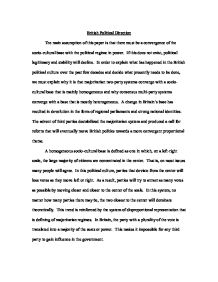 British Political Direction The main assumption of this paper is that there must be a convergence of the socio-cultural base with the political regime in power. If this does not exist, political legitimacy and stability will decline. In order to explain what has happened in the British political culture over the past few decades and decide what presently needs to be done, we must explain why it is that majoritarian two-party systems converge with a socio-cultural base that is mainly homogeneous and why consensus multi-party systems converge with a base that is mostly heterogeneous. A change in Britain's base has resulted in devolution in the form of regional parliaments and strong national identities. The advent of third parties destabilized the majoritarian system and produced a call for reform that will eventually move British politics towards a more convergent proportional theme. A homogeneous socio-cultural base is defined as one in which, on a left-right scale, the large majority of citizens are concentrated in the center. That is, on most issues many people will agree. In this political culture, parties that deviate from the center will lose votes as they move left or right. As a result, parties will try to attract as many votes as possible by moving closer and closer to the center of the scale. In this system, no matter how many parties there may be, the two closest to the center will dominate theoretically. This trend is reinforced by the system of disproportional representation that is defining of majoritarian regimes. In Britain, the party with a plurality of the vote is translated into a majority of the seats or power. This makes it impossible for any third party to gain influence in the government. ...read more.

To reiterate, "the exclusion of the minority is mitigated if majorities and minorities alternate in government-that is, if today's minority can become the majority in the next election instead of being condemned to permanent opposition." (Lijphart, 22) The advent of third parties in British politics has undermined the key to legitimacy because it has divided the opposition enough to allow for one party to hold power for extended periods of time. This would not be much of a problem if the cultural base were very homogeneous because policy would not differ significantly between parties. However, with the leftward movement of Labour and the increasingly heterogeneous society, the opposition loses trust in majority leadership. These fairly large minorities in majoritarian systems will not remain content when they are continually excluded from power. The move in Britain towards a more plural social base is becoming divergent with the political system of government. Undoubtedly, some reforms need to be made to the British system. However, which reforms and to what degree they need to be made is another question. The three major changes that I believe are necessary include the creation of a bill of rights, House of Commons reform, and electoral reform in order to disperse power throughout the system. Those opposed to a bill of rights for the individual fear that it may challenge the sovereignty of Parliament even though that is point of having one in the first place. The purpose of such a document is to protect the fundamental rights of the individual against the over-reaching arm of government. Britain's record of losses at the Court of Human Rights in Strasbourg can only reinforce the need for a bill of rights in the U.K. ...read more.

The latter is the reason for Conservatives to squeeze any political advantage that they might get from English resentment. Devolution is likely to change party politics into the formation of internal nationalist factions. Mr. Blair will not be able to control his party in such a centralized manner without distancing them at the same time. (Undoing Britain, 11) Relations between England and the rest of Britain are also affected by changes made to the central government at Westminster. Labour has proposed to ban Scottish votes on laws that directly affect England. This would mean that a government with a national majority might not be able to pass its English legislation. This does not bode well for New Labour due to their dependence on Scottish votes. Regional parliaments and a move to create an elected Senate have also been put into effect. The latter is definitely an improvement to the hereditary seating in the House of Lords. Such undemocratic rule by hereditary members compromises legitimacy and makes it a prime target for reform. The main effect of New Labour's reforms is that it has moved the spotlight from left-right issues to Britain-Europe issues. Government in Britain is beginning to move farther away from the centralized notion that once defined it. Changes in the socio-cultural base have been reproduced by spreading power away from Westminster through devolution, regional parliaments and the prospect of the European Union. There is no question that this will take time and is contingent upon some accidental results of reform. However, growing national and regional identities, as well as a "growing source of law, authority and political legitimacy across the water in Strasbourg and Brussels" will take British politics farther and farther from its long-standing model of democracy. (Undoing Britain, 19) ...read more.