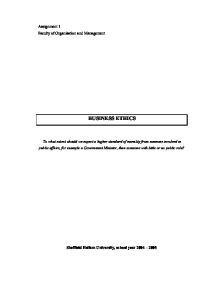 Assignment 1 Faculty of Organisation and Management BUSINESS ETHICS To what extent should we expect a higher standard of morality from someone involved in public affairs, for example a Government Minister, than someone with little or no public role? Sheffield Hallam University, school year 2004 - 2005 Introduction According to the dictionary Grand Robert, the term "public" means "what concerns people as a whole and what belongs to the social or political community and is done in its name"; a public figure is defined as "a person who is invested with an official function or plays an important role in the social or political life of his or her country". In relation to these definitions, it is possible to identify different categories of public figures with more or less important roles : a political figure such as a government Minister who creates laws and take important decisions for his country; an intellectual and a "star" who is defined as "an artistic performer or athlete whose leading role or superior performance is acknowledged" (www.dictionary.com). This essay will firstly attempt to explain what is the meaning of morality, its importance and the relation with virtues, with some examples and then it will identify the rights and ...read more.

Concerning politicians, a capacity to resist the pressures they are subjected to, and in particular from lobbies groups is required, but they need sometimes to assume the unpopular decisions they take, like for instance Tony Blair's decision to join the USA for the Iraq war. However a lot of courage was also required from the soldiers during the Normandy landing. Secondly, the prudence which mostly apply to intellectuals such as journalists or even political figures, who are required to be very careful when they transmit information. This will allow people to make their own judgement of a situation and not to be influenced by a certain view of presenting the facts. This has for example created problems in France, when a journalist announced on the eight o'clock news, that the president of a political party, Alain Jupp�, was sentenced to imprisonment and five year of inegibility whereas the final verdict has not been delivered yet. Then, the temperance which is in fact the self-control. To illustrate this virtue, the case of sport seems to be relevant but it can also apply to stars such as actors or singers. ...read more.

However, he decided to choose not to evacuate the city, to prevent the Germans to discover they were able to anticipate their actions. Churchill had to make a choice between killing thousands of people by not saying anything about the attack, or evacuating the city which would have maybe imply more death. He decided to benefit the greatest majority. Conclusion To conclude, morality is a crucial issue in everyday life, for politicians as well as for the "stars" or athletes as they have to "set the example". They are considered as "icons" and should be irreproachable as people tend to identify with them. However, as argued before, they are some field of their life that should be kept private, such as the private life of a politician and even David Beckam's one, as long as they don't use this kinds of argument to increase their popularity. Public figures do also have a right to privacy. Moreover, some differences have been identified between countries with for example France, which doesn't care about politicians having affairs and Great Britain being very critical toward David Blunkett. Finally, different standard of morality are expected from public figures according to their level of responsibility and the kind of decisions they have to make. ...read more.