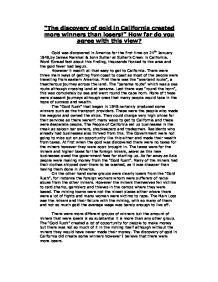 California Gold Rush &quot;The discovery of gold in California created more winners than losers!&quot; How far do you agree with this view?

"The discovery of gold in California created more winners than losers!" How far do you agree with this view? Gold was discovered in America for the first time on 24th January 1848,by James Marshall & John Sutter at Sutter's Creek in California. Word Spread fast about this finding, thousands flocked to the area and the gold fever had begun. However it wasn't all that easy to get to California. There were three main ways of getting from coast to coast as most of the people were travelling from eastern America. First there was the "overland route", a treacherous journey across the land. ...read more.

They could charge very high prices for their services as there weren't many ways to get to California and these were desperate people. The People of California set up businesses in the creak as saloon bar owners, shopkeepers and tradesmen. Residents who already had businesses also thrived from this. The Government were not going to miss out on an opportunity like this either and made their wealth from taxes. At first when the gold was discovered there were no taxes for the miners however they were soon brought in. The taxes were for the miners and higher taxes for the foreign miners, aswel as this new businesses owed the government fees for starting up. ...read more.

The mining towns were not the nicest places either where there were a lot of fights and many women were victims to rape. The Main Loss was the miners and their failure with the mining, with so many of them and not so much gold the average wage was barely enough to live off. There were more different groups of winners but the amount of miners that were losers is so substantial it is more than any other group. The "Gold Rush" created a lot of opportunity for people to make money but there was not so much of it in the mining itself although without the miners they would have never made their money. The discovery of gold in California did create some winners however I believe that there were more losers. ...read more.