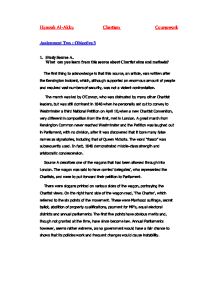 Humzah Al-Akku Chartism Coursework Assignment Two : Objective 3 1. Study Source A. What can you learn from this source about Chartist aims and methods? The first thing to acknowledge is that this source, an article, was written after the Kensington incident, which, although supported an enormous amount of people and required vast numbers of security, was not a violent confrontation. The march was led by O'Connor, who was distrusted by many other Chartist leaders, but was still dominant in 1848 when he personally set out to convey to Westminster a third National Petition on April 10,when a new Chartist Convention, very different in composition from the first, met in London. A great march from Kensington Common never reached Westminster and the Petition was laughed out in Parliament, with no division, after it was discovered that it bore many false names as signatories, including that of Queen Victoria. The word "fiasco" was subsequently used. In fact, 1848 demonstrated middle-class strength and aristocratic condescension. Source A describes one of the wagons that had been allowed through into London. The wagon was said to have carried 'delegates', who represented the Chartists, and were to put forward their petition to Parliament. There were slogans printed on various sides of the wagon, portraying the Chartist views. On the right hand side of the wagon read, 'The Charter', which referred to the six points of the movement. These were Manhood suffrage, secret ballot, abolition of property qualifications, payment for MP's, equal electoral districts and annual parliaments. The first five points have obvious merits and, though not granted at the time, have since become law. Annual Parliaments however, seems rather extreme, as no government would have a fair chance to shows that its policies work and frequent changes would cause instability. One of the slogans, illustrating a Chartist view read, 'Liberty is worth dying for'. This was obviously an incitement to violence, and the view held by fiery leaders, like O'Connor and Harney. ...read more.

The fact that his name is not mentioned supports the fact that this source is unreliable, even though it is primary. Another contradiction the witness makes, is when he describes the place of firing. At first he explains that, 'I could not say where the firing began', but comes back later to say, 'likely the firing began from the Westgate Hotel.' This source is very unreliable and not very useful. It does suggest however that not all the physical force chartists were as motivated and determined as Harney and O'Connor but were scared of what might happen to them. Source G is an autobiography by the General in command of the troops in the North, Charles Napier. The fact that this is his autobiography should indicate that the source may be bias, as he was a government official and working to keep Chartist movement under control, but reading this source and other sources, Charles Napier actually managed to establish friendly relations with the poor working class. Charles Napier was not against the people, in fact he had sympathy for them for it upset him to see the poverty around him, 'poor people.' He calls the Chartists 'fools!' Although this may seem insulting, it indicates that they weren't wicked or violent but stupid. Stupid for thinking they could put up a physical resistance against his army, 'we have the physical force.' This source indicates that the physical force chartists had very limited resources in terms of artillery and firepower and to try and attack would cause their deaths, 'they will suffer.' The British army at the time were also the most powerful in the world. They had 'cavalry' and explosive weapons, whilst the Chartists barely had guns. This source is reliable, as it comes from a man who, although against physical force charts, sympathised with them and wasn't bias, and it also shows us yet another reason why they were unsuccessful. ...read more.

Although the source's content includes writing which could inspire Chartists onto more serious action, there is a definite message of peaceful protest. Thus, this source doesn't suggest a Chartist rebellion. Source J, a photograph of the demonstration described in Source I, agrees that it was a peaceful demonstration. There doesn't seem to be any trouble or rash movements, thus it also suggests that a Chartist rebellion wouldn't be possible. This source isn't very reliable. Source K is rather like Source A. The evidence indicates that O'Connor wants to approach the government on peaceful terms, 'use moral force as long as possible' and that he doesn't want to fight until utterly necessary. However, if things aren't as he wants them to be, he will resort to violence, 'better to die free men than to live as slaves.' There is sufficient evidence to say that although O'Connor wrote and talked about violence, he was not prepared to act violently, his speeches were empty rhetoric. So, Source K has a split decision. Whilst on one hand it disagrees about their being a Chartist rebellion, there is some evidence that such an event could occur. Source L, a secondary source from a modern textbook, doesn't really decipher as to whether there could have been a rebellion or not. The source does bring up interesting issues, to debate whether Chartism was real or not. The evidence says that there wasn't any real fear to begin with, but it was the government that 'vilified' the chartists. It also brings out the fact that a lot of people thought there was a rebellion but it was really the authorities that encouraged such action. There was fear, just to carry out more operations and to hire more constables. Thus the government fanned the flame, so that all the descent, educated people supported them against the working classes. Whether these assumptions are true or not, it seems that Chartism wasn't as real a threat as often made out to be. Thus, source L remains in question. ???? ...read more.