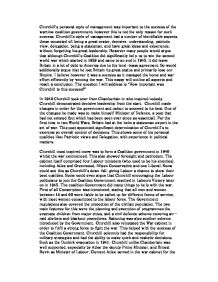 Churchill's personal style of management was important to the success of the wartime coalition government; however this is not the only reason for such success. Churchill's style of management had a number of identifiable aspects, these consisted of; being a great orator, decisive, understanding, patriotic view, delegation, being a statesman, and have great ideas and experience, without forgetting his great leadership. However many people would argue that although Churchill's Coalition did significantly help us to win the second world war which started in 1939 and came to an end in 1945, it did leave Britain in a lot of debt to America due to the lend-lease agreement. So would additionally argue that he lost Britain its great status and primarily lose our Empire. I believe however it was a success as it managed the home and war effort efficiently by winning the war. This essay will outline all aspects and reach a conclusion. The question I will address is "How important was Churchill to this success?" In 1940 Churchill took over from Chamberlain in who inspired nobody. Churchill demonstrated decisive leadership from the start. Churchill made changes in order for the government and nation to succeed to its best. One of the changes he made was to make himself Minister of Defence, a post that had not existed (but which has been seen ever since as essential). ...read more.

Ernest Bevin was the Minister of Labour and National Services from 1940 to 1945. Churchill brought a 'dramatic injection of energy' into the conduct of war and people working around him. He had an unusual degree of energy and self-confidence. This was all done with 'dramatic infection of energy' that turned his many doubters around. Churchill gave the Coalition Government and Country sense of direction and purpose. One of the most memorable speeches which Churchill gave was the 'No Surrender' speech which stated that 'we shall never surrender'. This was a huge leadership motive which showed sense of direction for the nation. However, although Churchill consulted the Coalition Government, he did make decisions against wishes of Chamberlain and Halifax. Lord Halifax was the Governments foreign secretary. It has been said that Winston Churchill gave Lord Halifax the role of foreign secretary in order to give the impression that the British government was united against Adolf Hitler This direction and purpose was coupled with great oratory that united the nation. Churchill wrote all of his own speeches. He spent less on carefully preparing his speeches and more upon spontaneity of them. Churchill had great directional qualities and with his oratory skills alongside his talent, many people would listen and follow what he said. ...read more.

Churchill instilled urgency with the "Action This Day", to boost the moral of Government politicians. Churchill brought enthusiasm and conviction where there had been little in the first months of war. Winston Churchill is accredited with the inspiration essential for keeping up morale in Britain's darkest hour and carrying out the decisions which was necessary for Britain's eventual victory. Churchill could not have done it alone; he needed help of fellow members of Government, such as Ernest Bevin and Clement Atlee. With Hitler making mistakes this could also be argued that this lead to such a success of Britain's victory. The Halt Order in Dunkirk is where Hitler could have attacked Britain but instead went east switching his attacks away from airfields and radar stations at the vital moment in 1940. If Hitler had of attacked then it could possibly have led to Britain losing the war. However, the Coalition Government success would certainly not have happened had he not been made leader in 1940. It is a fact that his influence reduced as war progressed. To the extent that Labour won 1945 election. However, Stalin stated that Britain's greatest role was to give 'time'. By this he meant we stood alone in 1940-41. The one man who inspired this was Churchill; he needed to draw on all his personal qualities. ...read more.