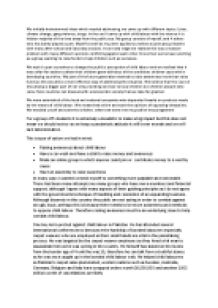 ﻿We initially brainstormed ideas which needed addressing, we came up with different topics: Litter, climate change, gang violence, drugs. In the end I came up with child labour with the view as it is hidden majority of the time away from the public eye. My group consists of myself, and 4 others who has barely played a part. Myself as well as my peers applied ourselves as joint group leaders with many after-school and Saturday sessions. At an early stage we realised this was a massive problem with many different opinions conflicting against each other. Since then we?ve been working as a group wanting to raise funds to help children such as ourselves. We took it upon ourselves to change the public?s perception of child labour and we realised that it was unfair for adults to allow their children grow oblivious of the conditions children cope with in developing countries. We part of the future generation wanted to raise awareness more than raise funds as this would be a more effective way of addressing the situation. We believe that the council should play a bigger part of not only providing services to local children but children aboard who come from countries not blessed with a democratic society that we take for granted. ...read more.

He helped child labourers as Pakistan?s carpet sales plummeted, western nations such as Sweden, Australia, Germany, Belgium and Italy have scrapped orders worth $6,000,000 and another 100$ million worth of cancellations are likely http://www.independent.co.uk/news/world/boys-murder-hits-pakistani-carpet-sales-1617833.html Therefore you can help child labour through direct action as the carpet weavers may choose to take a stance against child labour and create a child labour free organization making carpets expanding all over south Asia. Though after the murder died down sales picked up and few thought the message heeded. My group had their hearts set on my idea of a carwash. We got permission from the principal to use the school on Saturday and managed to persuade our citizenship teacher to supervise us. Unfortunately it did not come together as planned due to the car wash coinciding with our exams therefore we were unable to carry out the car wash. We then held a meeting in citizenship, where we brainstormed more manageable tasks. We came up with ideas such as holding a stall at lunch in the dining room to spread awareness and raise funds for a worthy cause. I then came up with a fairly simple idea of presenting a PowerPoint to school in order to raise awareness to the plight of children the same age as us. ...read more.

To put it mildly we surrendered and were defeated a futile opposition. We then had the assembly to the year 10 are which included: 1. Types of child labour 2. UN convention on the rights of children 3. Worst offending countries 4. How to combat child labour & the cycle of rejuvenation (how to help children out of child labour and into a mainstream child Me and John had papers with information on each issue which we read out to the audience in a bid to spread awareness. Our citizenship teacher took a picture as proof and it was then followed by a video of the benefits of child labour. We were then hit by technical difficulties and the speakers were not working. I had to then dictate for the soundless video explaining the worse opportunities a child can turn to including prostitution, begging and finally starving. We then finished of by giving out response sheets as we did not want 60 responses we stratified the year group by choosing 8 diverse people to represent the whole year. 85 % of our responses were positive which made the presentation a success as we managed to spread awareness and make the audience look around them as to not take things for granted. I wanted them to respect their education and lifestyle as many children their age around the world are WORKING 12 hours a day working. ...read more.