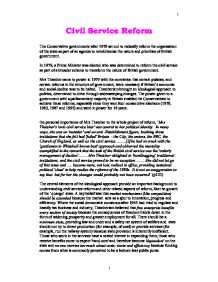 Civil Service Reform The Conservative governments after 1979 set out to radically reform the organisation of the state as part of an agenda to revolutionise the nature and priorities of British government. In 1979, a Prime Minister was elected who was determined to reform the civil service as part of a broader scheme to transform the nature of British government. Mrs Thatcher came to power in 1979 with the conviction that certain policies, and certain reforms in the structure of government, were necessary if Britain's economic and social decline was to be halted. Thatcherism brought an ideological approach to politics, determined to drive through widesweeping changes. The power given to a government with a parliamentary majority in Britain enabled the Conservatives to achieve these reforms, especially since they won four consecutive elections (1979, 1983, 1987 and 1992) and were in power for 18 years. the personal importance of Mrs Thatcher to the whole project of reform, 'Mrs Thatcher's 'anti-civil service bias' was central to her political identity. In many ways, she was an 'outsider' and an anti-Establishment figure, loathing those institutions that she felt had 'failed' Britain - the City, the unions, the BBC, the Church of England, as well as the civil service .........[S]he had no truck with the 'gentleman in Whitehall knows best' approach and abhorred the mentality exemplified in the remark that the task of the British civil service was the 'orderly management of decline'......... Mrs Thatcher delighted in 'handbagging' traditional institutions, and the civil service proved to be no exception ........ She did not let go of this issue and ..... became more, not less, radical in office, providing sustained political 'clout' to help realise the reforms of the 1980s. It is not an exaggeration to say that but for her the changes would probably not have occurred' (p121) The central elements of the ideological approach provide an important background to understanding civil service reform and other related aspects of reform, like the growth of the 'quango' state. ...read more.

Campbell and Wilson have outlined the importance of the 'Whitehall' model of British politics and specifically of the importance of the top civil servants giving policy advice to ministers. What follows is effectively a summary of Campbell and Wilson's outline of the 'Whitehall model' in order to provide a benchmark for analysing criticism of Conservative reforms and assessing their strength. Much of this discussion is rather general background, but necessary to appreciate the significance of the role of the senior civil service in providing independent advice to ministers. They say that it is in the government buildings off Whitehall that British policy making is generally conducted; British policy making is executive branch policy making. The British executive branch consists of two very different elements; the first, dominant, element, is composed of the ministers selected from the ranks of the majority party in Parliament. Ministers in contemporary Britain are career politicians who have climbed from the back-benches into ministerial office, but who are unlikely to stay long in their posts. The second element in executive politics consists of the career bureaucrats who share in the formulation and implementation of public policy. Campbell and Wilson say that career bureaucrats who work with ministers are typically graduates of elite universities (in the past nearly always Oxford or Cambridge) who have entered the civil service on a 'fast track' to the most senior posts, expecting to spend their working lives in professions that are secure, prestigious and, if not as well paid as in the private sector, reasonably remunerative compared with professions such as university teaching or medicine. Ministers are 'reponsible' in the sense of being publicly accountable for the work of the department and are assumed to be capable of establishing guidelines for their departments, ensuring that the departments followed their policies and ensuring that their officials did not commit abuses or errors in their work. The principle of collective ministerial responsibility is of great significance, reflecting the belief that the work of government can be carried out effectively only if the policies and perspectives of different departments are brought together effectively. ...read more.

(v) Tradition and change Each one of the traditional features of the civil service (see central themes section) has been subject to change. Each one of these features has changed to some extent. The size of the civil service is much smaller, around 200,000 less than in 1979. The role of policy advice has been down-graded and many reforms have stressed the importance of management skills. Ministerial responsibility has been clouded. Civil servants are expected to be committed to implement reforms and to deliver policy. The Conservative governments, and especially Mrs Thatcher, intervened in promotions and civil service organisation. The civil service has been infiltrated in many ways by business methods and is no longer a unified service nor entirely a career service. There have been accusations that the civil service neutrality has been eroded. Conclusion A different type of state has emerged. Government is less a provider of services direct to the public and more a facilitator for the provision of these services by others. British government is an enabling state which encourages beneficial action but leaves the tasks increasingly to other agencies. It is also a regulatory state whose top personnel provide rules and guidelines within which public and private sector organisations are expected to work. A further important aspect of the regulatory function is the establishment and monitoring of agreements with service providers. So the new state is a contracting state which sets, monitors and evaluates contracts made with independent agencies. This revolution was ideological but it was also driven by underlying concerns about the costs of government which have often risen from the successes of the past. New Labour have emphasised the 'hard choices' to be faced. What is already occurring is the addressing of those constitutional questions which were neglected under the Conservatives and Freedom of Information legislation, incorporation of the ECHR into British law and devolution will all directly impinge on issues discussed here. 1 1 ...read more.