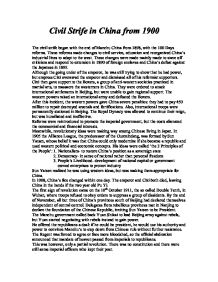 Civil Strife in China from 1900 The civil strife began with the end of Manchu China from 1898, with the 100 Days reforms. These reforms made changes to civil service, education and reorganized China's industrial lines to adapt to the west. These changes were made mainly made to stave off criticism and respond to extension in 1890 of foreign enclaves and China's defeat against the Japanese in 1895. Although the going under of the emperor, he was still trying to show that he had power, but empress Cixi overawed the emperor and dismissed all of his reformist supporters. Cixi then gave support to the Boxers, a group of anti-western societies practiced in martial arts, to massacre the westerners in China. ...read more.

Nationalism- to restore China's position as a sovereign state 2. Democracy- in sense of national rather than personal freedom 3. People's Livelihood- development of national capital or government owned enterprises to protect industry Sun Yatsen realized he was using western ideas, but was making them appropriate for China. In 1908, China's fate changed within one day. The emperor and Cixi both died, leaving China in the hands if the two year old Pu Yi. The first sign of revolution came on the 10th October 1911, the so called Double Tenth, in Wuhan, where troops refused to obey orders to suppress a group of dissidents. By the end of November, all but three of China's provinces south of Beijing had declared themselves independent of central control. ...read more.

He was forced to fund his government through foreign loans. The Guamindang used this act to try and criticize him, but all opposition was crushed. In November 1913, Sun Yatsen fled to Japan, hoping to concentrate on restructuring Guomindang as disciplined, centrally directed body. Yuan consolidated his power by banning parliament and parties, including GMD. He also abolished regional assemblies which were set up in 1912. In 1915 he then announced that he would restore imperial title and accept it for himself. Yuan's acts aroused fierce opposition, a few provinces declared themselves independent from Beijing and some generals in Beijing defected. Yuan was forced to renounce throne in March 1916 and three months later he died. After his death, he left a republican government that was split between rival factions, without loyalty of the army. This way China slid further into confusion and fragmentation. Mikhail Schemm 12L ...read more.