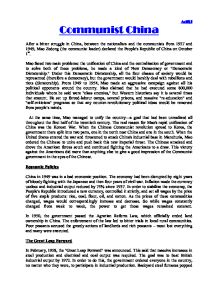 Aditi Communist China After a bitter struggle in China, between the nationalists and the communists from 1927 and 1949, Mao Zedong (the communist leader) declared the People's Republic of China on October 1st. Mao faced two main problems: the unification of China and the centralization of government and to solve both of these problems, he made a kind of New Democracy or "Democratic Dictatorship." Under this Democratic Dictatorship, all the four classes of society would be represented (therefore a democracy), but the government would harshly deal with rebellions and riots (dictatorship). From 1949 to 1954, Mao made an aggressive campaign against all his political opponents around the country. Mao claimed that he had executed some 800,000 individuals whom he said were "class enemies," but Western historians say it is several times that amount. He set up forced-labour camps, several prisons, and massive "re-education" and "self-criticism" programs so that any counter-revolutionary political ideas would be removed from people's minds. At the same time, Mao managed to unify the country-a goal that had been unrealized all throughout the first half of the twentieth century. ...read more.

The Great Leap Forward In February, 1958, the "Great Leap Forward" was announced. This said that massive increases in steel production and electrical and coal output was required. The goal was to beat British industrial output by 1972. In order to do this, the government ordered everyone in the country, no matter who they were, to participate in industrial production. Backyard steel furnaces popped up in everybody's backyard. The Great Leap Forward produced spectacular results in output; the quality, however, was extremely low. Most of the steel produced was simply useless, for backyard furnaces could not produce quality steel the way giant steel mills could. The Sino-Soviet Split Mao's Great Leap Forward proved to be a disaster for the Chinese. It crippled the economy so badly, that the people of China avoided famine only because of the government's strict and efficient rationing system. This also resulted in criticisms from the Russian leader, and Mao, in turn called him a coward, and a capitalist. ...read more.

In 1972, Japan accepted China as rightful government and had trade agreements with China. This began a series of diplomatic missions to China; by Mao's death in 1976, China had fully re-entered the international community. China today The Communist Party - China has the largest Communist Party in the world. About 40 million Chinese people belong to the party. But they make up only about 4 per cent of the total Chinese population. China also has a number of minor political parties, but such parties have little or no power. The Communist Party has four main decision-making bodies. These are the National Party Congress, the Central Committee, the Politburo (Political Bureau), and the Secretariat. The National Party Congress has more than 1,900 representatives who are selected by party members throughout the nation. The Central Committee consists of about 300 leading party members. The members are elected by the National Party Congress. The Politburo has about 20 members, who are top party leaders elected by the Central Committee. The Politburo includes a standing committee of 5 or 6 of the most important Communist Party leaders. The Secretariat has about 5 members who are elected by the Politburo's standing committee. ...read more.