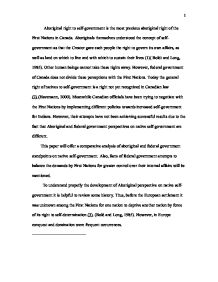 ------------------------------------- The federal government, however, will not consider the claim of the Coppermine Indians to petroleum under their lands on the basis that they did not make use of it historically, and thus are not considered to have an aboriginal right to it. In analogy to this example, the Arabs of Saudi Arabia should de denied the right to exploit oil resources. In this light federal argument looks silly. Further, the federal government claims that it has all rights in aboriginal areas, although it did not make use of those rights historically. Oddly, the federal government claims that it can make agreements regarding the removal of aboriginal title and rights but that it cannot pass laws recognizing aboriginal title and rights. Another absurd situation arises from a restrictive interpretation of aboriginal rights by the federal government, which concludes that a First Nation can exercise its right only in the precise way they did in pre-settlement times. If a First Nation used bone rather than steel fishhooks, than it can only exercise its aboriginal right to fish with bone hooks. The fact that settlers have been able to move from bone hooks to fishing trawlers in no way mitigates this nonsensical position. Canadians seem to be able to keep permanence of identity and rights despite their technological evolution from horses and buggies to jets. Knickers and three-cornered hats are no longer in fashion. Why must Indian people be limited to a particular anthropological time in order to qualify for exercise of an aboriginal right? ...read more.