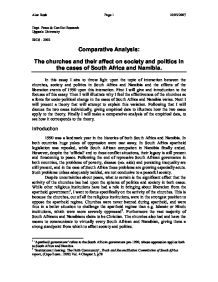 Comparative Analysis: The churches and their affect on society and politics in the cases of South Africa and Namibia.

Dept. Peace & Conflict Research Uppsala University BICS - 2002 Comparative Analysis: The churches and their affect on society and politics in the cases of South Africa and Namibia. In this essay I aim to throw light upon the topic of interaction between the churches, society and politics in South Africa and Namibia and the effects of the liberation events of 1990 upon this interaction. First I will give and introduction to the focuses of this essay. Then I will illustrate why I feel the effectiveness of the churches as a force for socio-political change in the cases of South Africa and Namibia varies. Next I will present a theory that will attempt to explain this variation. Following that I will discuss the two cases individually, giving empirical data to illustrate how the two cases apply to the theory. Finally I will make a comparative analysis of the empirical data, to see how it corresponds to the theory. Introduction 1990 was a landmark year in the histories of both South Africa and Namibia. In both countries huge yokes of oppression were cast away. In South Africa apartheid legislation was repealed, while South African occupation in Namibia finally ended. However, despite the 'official' end to these conflict situations, their legacy is still present and threatening to peace. Following the end of repressive South African governance in both countries, the problems of poverty, disease (viz. aids) and persisting inequality are still present, and in the case of South Africa these problems are growing especially acute. Such problems unless adequately tackled, are not conducive to a peaceful society. Despite uncertainties about peace, what is certain is the significant effect that the activity of the churches has had upon the spheres of politics and society in both cases. While other religious institutions have had a role in bringing about liberation from the apartheid government1, I want to focus specifically on the activity of the churches. ...read more.

Such action, especially towards to the end of the 1980s did weaken the government and coupled with military failures in Angola and escalating unrest in Namibia, the apartheid regime was beginning to lose its control. At this time the rising levels of violence and unrest caused the churches to draw closer to one another. Ecumenism grew from strength to strength and more and more churches openly criticised apartheid. Examples of such criticism were the Institute for Contextual Theology's Kairos Document in 1985, and the Call for Prayer to End Unjust Rule by the SACC26. By 1986 the DRC began to question its own theology27. The crescendo of church criticism, representing a polarisation of opinion against apartheid among the majority of South Africans, created a tense atmosphere, where the government grew to see that no matter how much violence it used to bring order, there could be no stop to civil unrest until apartheid ceased. When apartheid did cease in 1990 and the country moved towards democratic elections, the ecumenism that flourished in the late 80s ceased to mature. With the disappearance of the common evil, which apartheid represented, the churches had no clear or coherent strategy for the future. The possibility of such a strategy was rather unlikely due to the problem of racially structured congregations, which existed in some form within most of the churches. Even though apartheid ceased to exist the DRC did not unite with the rest of its family of segregated churches, although it claims to be open to the idea. 'Since 1994 the ideal of unification with the Uniting Reformed Church in Southern Africa, the Dutch Reformed Church in Africa and the Reformed Church in Africa has gathered momentum although a lot of work still has to be done'.28 Clearly for there to be a peaceful and just society, there needs to be reconciliation between the races. However due to their different social composition different churches had different ideas about what reconciliation meant. ...read more.