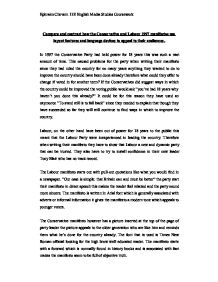 Compare and contrast how the Conservative and Labour 1997 manifestos use layout features and language devices to appeal to their audiences.

Compare and contrast how the Conservative and Labour 1997 manifestos use layout features and language devices to appeal to their audiences. In 1997 the Conservative Party had held power for 18 years this was such a vast amount of time. This caused problems for the party when writing their manifesto since they had ruled the country for so many years anything they wanted to do to improve the country should have been done already therefore what could they offer to change if voted in for another term? If the Conservatives did suggest ways in which the country could be improved the voting public would ask "you've had 18 years why haven't you done this already?" It could be for this reason they have used an oxymoron "To stand still is to fall back" since they needed to explain that though they have succeeded so far they will still continue to find ways in which to improve the country. Labour, on the other hand have been out of power for 18 years to the public this meant that the Labour Party were inexperienced in leading the country. ...read more.

It echoes Luther kings speech "I have a dream" each paragraph begins with "I want" or "I believe" this borrows the power of Luther's very influential speech. The Labour Party uses religious images and phraseology "...in which 10 specific commitments I put before you...", "they are our covenant with you" and "I want to renew faith..." These quotes suggest a religious Symantec field being built up and just like in religion people believe strongly in what they believe in, the public should carry that same faith to Tony Blair and the new Labour Party the faith that was lost to the Conservative Party 18 years ago. Both Parties use personification the Labour Party says "I want a Britain that does not shuffle..." and Conservatives says "A country once the sick man of Europe..." they use this language device of personification to tell us what would happen if the other party is elected into government. The Labour Party try to make their manifesto appeal to as many people as possible which makes it very hard as one can only really be right wing or left wing "better schools, better hospitals, better ways of tackling crime, better ways of building a modern welfare state..." ...read more.

This quote also praises the British people and in life before one asks someone else for something from him if he praises him and makes him happy he is more likely to get what he wants so to here where the Labour Party praise the British public and then obviously expect the public to vote them in as the party has pleased them. The Conservative Party use the declarative mood to present opinion as fact for example "the Conservative administrations elected in 1979 are among the most successful in British peace time history." The Conservatives start off with fact and then present their opinion of themselves as fact however the reader at first sight believes it all to be fact. The main difference between the two manifesto's is that the Labour Party focuses more on the future and possibilities of growth of the nation. Whereas the Conservatives play on fear of the future and on the fear of change they can do this because they are the ones with a good record and why should the voting public leave us and take risks with a new inexperienced party. ?? ?? ?? ?? Ephraim Chevern 11E English Media Studies Coursework ...read more.