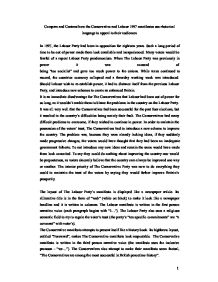 Compare and Contrast how the Conservative and Labour 1997 manifestos use rhetorical language to appeal to their audiences In 1997, the Labour Party had been in opposition for eighteen years. Such a long period of time to be out of power made them look unreliable and inexperienced. Many voters would be fearful of a repeat Labour Party pandemonium. When The Labour Party was previously in power it was accused of being "too socialist" and gave too much power to the unions. While taxes continued to ascend, the countries economy collapsed and a three-day working week was introduced. Should Labour wish to re-establish power, it had to distance itself from the previous Labour Party, and introduce new schemes to create an enhanced Britain. It is an immediate disadvantage for The Conservatives that Labour had been out of power for so long, as it wouldn't enable them to blame the problems in the country on the Labour Party. It was all very well that the Conservatives had been successful for the past four elections, but it resulted in the country's difficulties being mainly their fault. The Conservatives had many difficult problems to overcome, if they wished to continue in power. ...read more.

In The Conservative manifesto, the modal verb "must" is often used to constantly remind the voters that The Conservatives are in fact the better party and have better aims and values. "We have turned around out economic fortunes. We have fewer people out of work and more in work" and "There can be not doubt that we have created a better Britain". These declarative statements may sound like objective truth but are in fact it is subjective opinion. They are used to appeal to the readers and make them think that if the Party is re-elected, the country will prosper furthermore. The Labour Party has left wing views. It believes in the community. It believes that it should increase taxes to re-develop and improve hospitals, schools and other public services for the satisfaction of citizens: "Better schools, better hospitals, better ways of tackling crime, of building a modern welfare state". Labour wants a Britain with "shared values and purpose where merit comes before privilege, run for the many, not the few". These are the central aims of the Labour's manifesto. People who agree with these aims would be Labours core voters. The Conservative Party has right wing views. They wish to decrease taxes for the happiness of citizens. ...read more.

These sentences would appeal to the widest audience because it makes them think that they share the same aims, and have achieved the same goal as the government. Personification is used to make the readers recall that Labour brought "the country to its knees". Constant influences to vote for Conservatives are detected throughout the manifesto, "To stand still is to fall back". This oxymoron is used to suggest that The Conservatives should continue to rule the country in order to improve it. After reading each manifesto, I believe that The Labour Party produced the better manifesto. It made their beliefs sound effective and simple, and it caught more of my attention than The Conservative manifesto did. Although I think that The Labour manifesto was better because of its use of language, it could be said that The Conservatives had a much harder manifesto to write. After all, The Conservatives had been in power for eighteen years and were running short of ideas. Even though The Labour party had a difficult manifesto to write, they handled it well, and writing about a "New" Labour with a new, effective leader refreshed their image. Despite the problematic situation of The Conservative Party It is my opinion that Labour deserved to win and that they truly overcame the difficult task of writing their manifesto in such a challenging position. ?? ?? ?? ?? 1 ...read more.