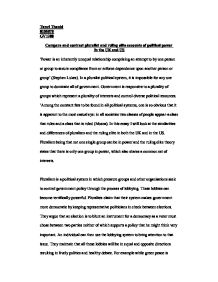 Tanvi Thanki 0255878 GV1200 Compare and contrast pluralist and ruling elite accounts of political power In the UK and US 'Power is an inherently unequal relationship comprising an attempt to by one person or group to secure compliance from or enforce dependence upon another person or group' (Stephen Lukes). In a pluralist political system, it is impossible for any one group to dominate all of government. Government is responsive to a plurality of groups which represent a plurality of interests and control diverse political resources. 'Among the constant fats to be found in all political systems, one is so obvious that it is apparent to the most casual eye: in all societies two classes of people appear-a class that rules and a class that is ruled (Mosca). In this essay I will look at the similarities and differences of pluralism and the ruling elite in both the UK and in the US. Pluralism being that not one single group can be in power and the ruling elite theory states that there is only one group in power, which also shares a common set of interests. ...read more.

They can also buy shares in companies to wield ownership rights. Government can also consult the people directly through referenda and local elections. In the US, the parties are more decentralized which makes them weaker as the political power is more spread out, so they do not benefit form power of numbers. Whereas the UK, the parties are more centralized, which makes them stronger. The UK do benefit from power of numbers. 'Elitism' is the name usually given to a theory associated with a group of social scientists who wrote in Europe in the latter decades of the nineteenth and the early decades of the present century. The social scientists such as Gaetano Mosca, Vilfredo Pareto and Robert Michels, did not have identical views they just shared common concerns and were concerned with many common historical problems: hence they are usually grouped together into the category of elitists. The power in elitism is more concentrated than it is with pluralism, in which power is diffused. ...read more.

green peace and students. So, for anyone to enter they just have to believe in what they are arguing for. Pluralists can fight for what they believe in whenever they want to. Lobbying helps the group gets there views and opinions across to the government, if the group believe strongly enough in what they are fighting for, the politicians in power may eventually agree with what the groups have to say. The ruling elites are different in the way that the decisions cannot be altered by any pressure groups. Once they have made a decision they stick to it. Even though many people's views and opinions are not listened to, the people also want to be ruled by elite. They have a psychological need to identify rulers and to follow them. The similarities they both have, is that they are parties of power. They have the power to change things going on in the country. They both make decisions in order to do better for their own country. Although decisions are made in different ways and by different people, overall pluralists and the ruling elite make decisions on what they think is best for themselves and for the people. ...read more.