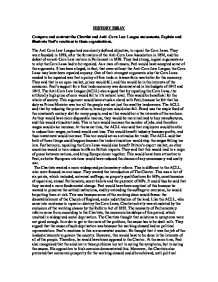 Compare and contrast the Chartist and Anti -Corn Law League movements. Explain and illustrate Peel's reactions to these organisations.

HISTORY ESSAY Compare and contrast the Chartist and Anti -Corn Law League movements. Explain and illustrate Peel's reactions to these organisations. The Anti Corn Law League had one clearly defined objective, to repeal the Corn Laws. They were founded in 1839, after the formation of the Anti-Corn Law Association in 1836, and the defeat of an anti-Corn Law motion in Parliament in 1839. They had strong, logical arguments as to why the Corn Laws had to be repealed. As a man of reason, Peel would have accepted some of the arguments. It has been alleged, in fact, that even without the Anti-Corn Law League, the Corn Laws may have been repealed anyway. One of their strongest arguments why the Corn Laws needed to be repealed was that a policy of free trade or laissez-faire was better for the economy. They said that in an open market, prices would fall, and this would be in the interests of the consumer. Peel's support for a free trade economy was demonstrated in his budgets of 1842 and 1845. The Anti-Corn Law League (ACLL) also argued that by repealing the Corn Laws, the artificially high price of corn would fall to it's natural level. This would be beneficial for the whole of society. This argument would have struck a chord with Peel, because he felt that his duty as Prime Minister was too all the people and not just the wealthy landowners. ...read more.

The obvious evidence of this, is the 'People's Charter,' which when presented to Parliament on 12th July 1839, had 1 280 000 signatures, and a later petition which had even more, at around three million. The sheer strength of the grass-root level support was one of the Chartists strongest assets. This would have some bearing upon Peel, because he felt he had to do what was in the interests of his Queen and country. Ignoring the strong support could provoke a revolution, and Peel would want to avoid this at all costs. It would be accurate to say that the utilisation of these strengths, and thus the chance of success, would be dependent on the leadership of the two movements. The two key leaders of the Anti-Corn Law League were John Bright and Richard Cobden. Neither was particularly old, with Bright 30 when the Conservatives returned to office in 1841 and Cobden 37. John Bright was an extremely effective public speaker, and this made him an extremely important asset to the ACLL. Cobden was the fonder of the ACLL, and his election to the House of Commons in 1841 was also another advantage. Peel recognised the influence of the League in Parliament. After hearing Cobden's speech in March 1845, putting forward the case for repeal, Peel conceded the logic of the case against the Corn Laws. ...read more.

Moreover, the Chartists did not enjoy good relations with the middle classes. Lastly, one of the major differences between the two movements was that whereas the ACLL were a moderate, single party group, the Chartists wanted a more fundamental change that Britain had not seen since the seventeenth century. Peel was unlikely to give in to such fundamental change, which would inevitably threaten the settled institutions. In conclusion, the Anti Corn Law League was successful in achieving its aim, but the Chartists were not. This was because the Anti-Corn Law League was a highly effective and organised movement. It was largely united in its aim, and had strong leadership, which created real influence amongst Parliament. The Chartists were not as well organised and their leadership was not as effective. The ACLL had a large membership mainly made up middle classes, and from the Tamworth Manifesto, it is known that Peel was keen on winning middle class support for the existing system. The Chartists had a membership made up of working class people. Peel was less conceding towards them, and although he recognised his duty as Prime Minister extended to all people, he was sure that it was the job of the aristocrats to govern. The rational arguments of the ACLL were well received by Peel, who accepted the underlying policy of free trade. Peel did not however, see the need for fundamental, and potentially damaging change, to the finest system in existence in the world, and so whilst the Corn Laws were repealed, the Charter was not adopted. ...read more.