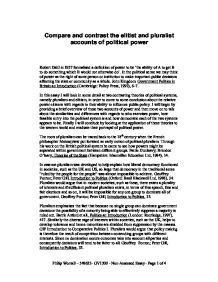 Compare and contrast the elitist and pluralist accounts of political power

Compare and contrast the elitist and pluralist accounts of political power Robert Dahl in 1957 formalised a definition of power to be 'the ability of A to get B to do something which B would not otherwise do'. In the political sense we may think of power as the right of some person or institution to make important public decisions affecting the state or community as a whole. John Kingdom. Government Politics in Britain an Introduction (Cambridge: Policy Press, 1992), 6-7. In this essay I will look in some detail at two contrasting theories of political systems, namely pluralism and elitism, in order to come to some conclusion about the relative power citizens with regards to their ability to influence public policy. I will begin by providing a brief overview of these two accounts of power and then move on to talk about the similarities and differences with regards to who exercises power, how feasible entry into the political system is and how democratic each of the two systems appears to be. Finally I will conclude by looking at the application of these theories to the western world and evaluate their portrayal of political power. The roots of pluralism can be traced back to the 18th century when the French philosopher Motesqview put forward an early notion of political pluralism. ...read more.

However between elections the ruling elite will have greater opportunity to dominate the political resources and hence exercise greater powers. Similarly both elitists and pluralist provide different accounts of how political power is distributed through society. Pluralists would argue that power is in fact dispersed through society between groups of individuals who in tern have the ability to affect the policy decisions. This is not to say that power is divided equally between interest groups. Indeed some groups will be larger, be better organised and have greater access to 'policy-making' circles and so in effect exercise more power than others. Barrie Axford et all, Politics an Introduction, 417. The key idea here is that there are multiple sources of power. In contrast elite theorists would state that in practice power will inevitably 'fall into the hands of a few'. They see political resources as being dominated by a minority through their skilful utilisation. A study by C Wright Mills in the 1950s would appear to strengthen this argument since he concluded that critical political decisions in America were being made at that time by a 'power elite'. John Kindom. Government Politics in Britain an Introduction, 431. The relative sharing of power within a pluralistic system emphasises the role of interest groups in shaping policy. ...read more.

GIP Introduction to Comparative Politics. Indeed it could be argued that representatives of interest groups are elites themselves and on that basis will prefer to deal with other elites. John Esberey; Larry Johnston, Democracy and the state ( Ontario: Broadview press ltd, 1994 ), 193. In this way we may think, as Schumpeter did, that democracy can still exist in the form of 'democratic elitism' where elites are required to compete for the popular vote of the masses. Barrie Axford; Gary K, Browning, Politics an Introduction, 119. This would seam a more reasonable theory in societies like the UK and US where evidently there are strong factions between groups of elites themselves. It could be argued that the expansion in ICT over the last decade or could in the future facilitate direct democracy although in today's would it would seam that on balance the elite account of power seams more realistic. That is not to say that elitism is provides all the answers. In the US it is difficult to identify a single elite that is able to dominate all of government and in the case of the UK there would seam to be little coherence between groups of elites themselves. Providing that elected elites are accountable to the masses and are elected regularly then it would seam the elitist account of political power can be democratic. ...read more.