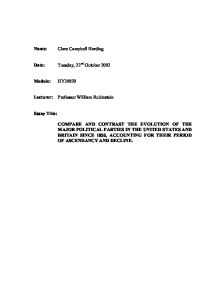 Compare and Contrast the Evolution of the Major Political Parties In the United States and Britain since 1850, Accounting for their period of ascendancy and decline

Name: Clare Campbell Harding Date: Tuesday, 22nd October 2002 Module: HY39820 Lecturer: Professor William Rubinstein Essay Title: COMPARE AND CONTRAST THE EVOLUTION OF THE MAJOR POLITICAL PARTIES IN THE UNITED STATES AND BRITAIN SINCE 1850, ACCOUNTING FOR THEIR PERIOD OF ASCENDANCY AND DECLINE. Since 1850 there have been great political changes in both Great Britain and the United States. Political parties have been founded and have dissolved, and parties' views have changed - some quite dramatically. In both Great Britain and America there are many political parties, but only two in each country are likely to 'lead' their nation. In America the Democratic National Committee rival the Republicans and in Britain the Conservative Party oppose the Labour Party. However there is also a tertiary party in Great Britain called the Liberal Democrats, led by Charles Kennedy, who is fighting to join the same 'league' as Labour and the Conservatives. The Republicans and the Democrats have been fighting for supremacy without interruption for 150 years, before that the American Whigs were a major party. Founded in 1844 and led by National Republicans and ex-Federalists the American Whig Party was on a par with the Democrats in the 1840's. The party stood for 'positive liberal state', where the government would subsidise and/or protect enterprises which contributed to economic growth. The Democrats, on the other hand, stood for 'negative liberal state' whereby the government would keep out of the economy. The Whigs primary concerns were to promote internal improvements, such as roads, canals and train lines. Many Westerners favoured this as they were quite isolated. However after the birth of the Republican Party in 1854, many Whigs deserted their party in favour of the new anti-slavery Republicans. The Know-Nothing Party also appealed to Whigs for its anti-immigrant and anti-Catholic views. The American Whig Party disbanded in 1856. In 1792 Thomas Jefferson founded the Democratic Party and in 1848 the name was officially changed to the Democratic National Committee. ...read more.

The USA entered the war in 1917 after pressure from Theodore Roosevelt, Germanys' refusal to back down, and the fact that the Germans kept managing to kill Americans with every boat they blew up. World War I had an important political effect on Britain from 1915 with the "end of the Liberal government"vi to December 1918 when Lloyd George's coalition won a landslide victory. In May 1915 the Conservative Party agreed to join a coalition under the Liberal Prime Minister, Herbert Asquith, however the Conservatives soon became concerned with Asquith's "lack of direction in the war"vii and pushed for a replacement in David Lloyd George. Many see Lloyd George as the man who won the war and he did seem to rally the government into shape. He set up a small war cabinet in 1916 comprising of himself, the Conservative and Labour leaders, the former governor of Cape Colony and George Nathaniel Curzon, a British statesman who held various offices under Lloyd George. This cabinet made all of the main decisions. Despite this, Lloyd George had many enemies and was even blamed for the decline of the Liberal Party. The Conservatives had made some organisational reforms during this ten year period, such as creating the post of Party Chairman in 1911 to oversee the work of the Central Office. Problems were rising in the Conservative Party however. Due to economic depression and failures of policy the coalition was becoming unfavourable. On October 19th 1922 a revolt against the coalition took place where Andrew Bonar Law "ousted both Chamberlain as Party Leader and Lloyd George as Prime Minister"viii. The American Democrats led the US through World War II with Franklin Delano Roosevelt as President, elected in 1932. This was a period of great depression in the United States following the Wall Street Crash on 29th October 1929. Roosevelt knew that by spending money the country could save money so he chose to build airports and shipyards, thereby creating jobs for the unemployed. ...read more.

Thatcher did well in her handling of the Falklands crisis however, and Britain emerged victorious over Argentina restoring the nations hope in the Conservative Party. She was re-elected twice over, but between 1987 and 1990 she was determined to introduce the poll tax, an unpopular policy, even with the rest of her cabinet. Behind closed doors the party began to divide over Europe and Mrs Thatcher was forced to resign in November 1990. However the party had not fallen out with Britain and John Major, Thatcher's' replacement was elected Prime Minister. With the help of his slogan: "read my lips - no new taxes" George Bush was elected President in 1988. In 1991 Bush broke his pledge and, along with the continuing recession, the 1990 budget agreement had "led to an increase of more than $1 trillion in the national debt during Bush's Presidency."xiii Although the Cold War ended in 1990, on August 2nd of that year Saddam Hussein, the dictatorial ruler of Iraq, invaded Kuwait and threatened Saudi Arabia. Bush sent American troops to Saudi Arabia in order to protect the oil reserves there. Operation Desert Storm freed Kuwait in 1991. This victory could not help Bush's administration to win the 1992 election however; he was replaced by the Democrat William J. Clinton. George Bush's son, George W. Bush is currently the Republican President and following a landslide victory in 1997 Tony Blair became the current Labour Prime Minister. Blair and Bush are both enjoying a comfortable economy and, following the September 11th attacks, are united against a common enemy - terrorism. i "The Conservative Party-From Peel to Major" page 74 ii "Modern British History" page 236 iii "American Past and Present" page 370 iv "The Penguin History of the USA" page 441 v "Modern British History" pages 302-303 vi "Modern British History" page 355 vii www.conservatives.com viii www.conservatives.com ix "America Past and Present" page 464 x "America Past and Present" page 524 xi "Modern British History" page 500 xii "America Past and Present" page 564 xiii "America Past and Present" page 598 ?? ?? ?? ?? ...read more.