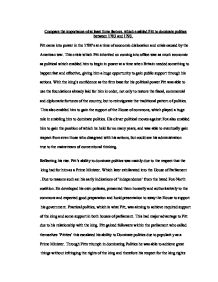 Compare the importance of at least three factors, which enabled Pitt to dominate politics between 1783 and 1793.

Compare the importance of at least three factors, which enabled Pitt to dominate politics between 1783 and 1793. Pitt came into power in the 1700's at a time of economic dislocation and crisis caused by the American war. This crisis which Pitt inherited on coming into office was as much economic as political which enabled him to begin in power at a time when Britain needed something to happen fast and effective, giving him a huge opportunity to gain public support through his actions. With the king's confidence as the firm base for his political power Pitt was able to use the foundations already laid for him in order, not only to restore the fiscal, commercial and diplomatic fortunes of the country, but to reinvigorate the traditional pattern of politics. This also enabled him to gain the support of the House of commons, which played a huge role in enabling him to dominate politics. ...read more.

The list of Pitt's ministers did not inspire confidence either, looking weak among the House. But due to the absence of Shellbourne Pitt was able to rapidly turn this around. It meant that Pitt could be his own man becoming an independent PM. Pitts strategy in the early months of 1784 was to demonstrate capability and authority in parliament despite majorities against him. This showed his ambitious leader ship skills. And although Fox lost the general election and many people through this hated Pitt he soon was able to show his true political ability and therefore the positive aspects as to why he had won general election. His dominance in politics seemed an endorsement of traditional values. The manner in which he bore himself in triumph confirmed the belief of backbencher MP's that the body politic was sound and that in Pitt the nation had a first minister who could be trusted to make the traditional system work. ...read more.

Within this framework his first priority was to raise revenue. All this reflected Pitt's political intelligence, and therefore gained support within parliament and among the people. Even those that where unhappy with Pitts actions could se the admiration was true to the mainstream of conventional thinking. Overall these factors show how Pitt was able to Dominate politics between 1783 and 1793. His leadership skills are reflected greatly in his onward battle to domination within British politics. His support from the King was a major advantage to period in which Pitt was in power. It not only helped him to get to where he was but it helped him maintain his position due to the monarch playing a huge role in Britain in the 1700's. Pitt was able to achieve things without infringing on the rights of the monarch keeping to his own political strategies. Gaining also support from hose that did not agree with him actions purely through his ability to conquer such revivalry within Britain showing his great skills within Power. ...read more.