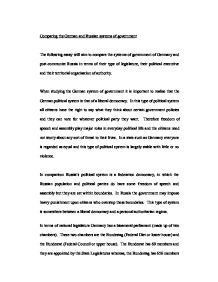 Comparing the German and Russian systems of government

Comparing the German and Russian systems of government The following essay will aim to compare the systems of government of Germany and post-communist Russia in terms of their type of legislature, their political executive and their territorial organisation of authority. When studying the German system of government it is important to realise that the German political system is that of a liberal democracy. In this type of political system all citizens have the right to say what they think about certain government policies and they can vote for whatever political party they want. Therefore freedom of speech and assembly play major roles in everyday political life and the citizens need not worry about any sort of threat to their lives. In a state such as Germany everyone is regarded as equal and this type of political system is largely stable with little or no violence. In comparison Russia's political system is a federation democracy, in which the Russian population and political parties do have some freedom of speech and assembly but they are set within boundaries. In Russia the government may impose heavy punishment upon citizens who overstep these boundaries. This type of system is somewhere between a liberal democracy and a personal authoritarian regime. In terms of national legislature Germany has a bicameral parliament (made up of two chambers). These two chambers are the Bundestag (Federal Diet or lower house) and the Bundesrat (Federal Council or upper house). ...read more.

These include laws on the federal budget and taxes; financial, foreign currency, credit, and customs regulation and money emissions; the ratification or rejection of international treaties; the status and protection of the country's borders; and declarations of war and peace. However, if the law is rejected, committees comprised of representatives of both houses may be set up to make appropriate changes, and the law may go back to the Duma for another vote. The State Duma is a highly influential institution and according to the guidelines set out in the constitution, the Duma's responsibilities include approving the president's choice of prime minister and holding a confidence vote on the government. It also has the right to declare amnesties and begin impeachment proceedings against the president. The Federation Council, the Federal Assembly's upper chamber, has 178 deputies, two from each of Russia's 89 regions. One of the members is the locally elected executive head; the other is the head of the regional legislature, selected by the elected regional deputies. As with the Bundesrat in Germany The Federation Council is the weaker half of the legislature. However The Federation Council is still vested with considerable authority under the 1993 constitution. Deputies have the power to confirm border changes within the federation, approve the introduction of martial law or a state of emergency by the president and vote on the deployment of Russian armed forces outside of its borders. The federation council is also empowered to schedule presidential elections, impeach the president, approve the appointment of Constitutional and Supreme Court judges and approve or dismiss the General Prosecutor. ...read more.

The main government divides territory among smaller districts because of the country's size and it makes it easier to manage and disperses power. 'The federal principle is the method of dividing powers so that the general and regional governments are each, within a sphere, co-ordinate and independent'3. The German government sovereign authority is territorial shared between the main federation and the 16 component states (Lander) that I have already mentioned. These 16 political districts are made up of 11 old states and 5 that have been created since the reunion of the East and West. Likewise, in May 2000 the Russian president Putin divided Russia into 7 federal districts, each encompassing several republics and each headed by a presidential enforcer tasked to maintain the supremacy of federal law. A major difference between the German and Russian federal states is the fact that Germany has a far more stable system of government. Russia on the other hand experienced many federal problems and losing control over its district of Chechnya provides one such example. Russia used military force against Chechnya. This is not very democratic and demonstrates the unstable state of Russia's Government. In conclusion the system of government in the two countries is different. There is a contrasting executive power between the countries, with Russia's president being very powerful and the German president having very little power. Despite this there are some similarities, for example the way in which the legislative sector of government is split into two chambers. Territorial however, they have both divided themselves into federal districts or states but have experienced various levels of success and go about controlling them in very different ways. ...read more.