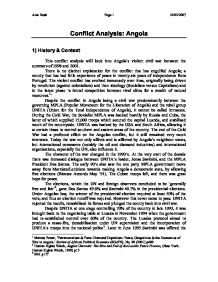 Conflict Analysis: Angola 1) History & Context This conflict analysis will look into Angola's violent civil war between the summers of 1998 and 2001. There is no distinct explanation for the conflict that has engulfed Angola; a county that has had little experience of peace in twenty-six years of independence from Portugal. The violent conflict has evolved immensely over time, originally being driven by revolution (against colonialism) and then ideology (Socialism versus Capitalism) and in the latest phase 'a brutal competition between rival elites for a wealth of natural resources.1' Despite the conflict in Angola being a civil war predominantly between the governing MPLA (Popular Movement for the Liberation of Angola) and the rebel group UNITA (Union for the Total Independence of Angola), it cannot be called intrastate. During the Cold War, the Socialist MPLA was backed heavily by Russia and Cuba, the latter of which supplied 15,000 troops which secured the capital Luanda, and stabilised much of the countryside. UNITA was backed by the USA and South Africa, allowing it at certain times to control southern and eastern areas of the country. The end of the Cold War had a profound effect on the Angolan conflict, but it still remained very much interstate. Today the war not only affects and is affected by Angola's neighbour states, but international commerce (notably the oil and diamond industries) and international organisations, especially the UN, also influence it. The character of the war changed in the 1990's. At the very start of the decade there was increased dialogue between UNITA's leader, Jonas Savimbi, and the MPLA President Dos Santos. The early 90's also saw the one party MPLA government move away from Marxism/Leninism towards making Angola a democratic state, by allowing free elections (Bicesse Accords May '91). The Cuban troops left, and there was great hope for peace. The elections, which the UN and foreign observers concluded to be 'generally free and fair'2, gave Dos Santos 49.6% and Savimbi 40.7% in the presidential elections. ...read more.

September saw further advances by UNITA, with its progression in both Malanje and Uige provinces. UNITA received external assistance from DRC rebels in Uige27. During October, fighting intensified in these northern provinces, spilling into Lunda Norte and Lunda Sol. Strategically these provinces were the chief diamond producing zones of Angola, and were thus essential for funding UNITA's war effort. During this period there was significant polarisation with UNITA being suspended from GURN. However at this point a splinter faction of UNITA - the UNITA Renewal Committee (UNITA-RC) - was formed under the leadership of Jorge Valentim. This allowed the government to cut all ties with Savimbi's UNITA, although Valentim's movement received negligible support from UNITA members28. In September the UN formally blamed UNITA for the present crisis29; an external factor, which set the scene for the UN's expanded efforts to undermine Savimbi's UNITA regime. By the end of the year, the violence had escalated to the level where it would stay for about a year. In December, prior to the government's congress, the FAA launched a big air attack on the UNITA strongholds of Bailundo and Mungo. UNITA retaliated by indiscriminately shelling and forcing the government to withdraw from these cities. This caused full polarisation during the government congress. President dos Santos called for the withdrawal of the UN observer mission and the end of the peace process, as well as the total isolation of Savimbi. These requests were followed through when the government branded Savimbi a war criminal and rejected Lusaka in January30. During late December and early January two UN C-130 Hercules aircraft crashed in suspicious circumstances, causing a deterioration of relations between the UN and the two warring parties. The UN deplored the lack of co-operation by UNITA31, and in a report, Kofi Annan stated that both the parties were to blame for the worsening situation. He stated that there was nothing left to do but to pull out the monitors and aid workers32. ...read more.