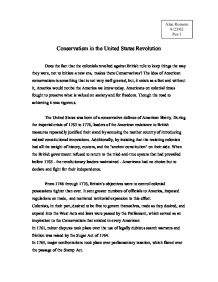 Conservatism in the United States Revolution

Conservatism in the United States Revolution Does the fact that the colonials revolted against British rule to keep things the way they were, not to initiate a new era, makes them Conservatives? The idea of American conservatism is something that is not very well greeted, but, it exists as a fact and without it, America would not be the America we know today. Americans on colonial times fought to preserve what is valued on society and for freedom. Though the road to achieving it was rigorous. The United States was born of a conservative defense of American liberty. During the imperial crisis of 1763 to 1776, leaders of the American resistance to British measures repeatedly justified their stand by accusing the mother country of introducing radical constitutional innovations. ...read more.

It sent greater numbers of officials to America, imposed regulations on trade, and restricted territorial expansion to this effect. Colonists, in their part, desired to be free to govern themselves, trade as they desired, and expand into the West Acts and laws were passed by the Parliament, which served as an inspiration to the Conservatism that existed in every American: In 1761, minor disputes took place over the use of legally dubious search warrants and friction was raised by the Sugar Act of 1764. In 1765, major confrontations took place over parliamentary taxation, which flared over the passage of the Stamp Act. In 1761, the Townshend Duties inspired many writers, such as John Dickinson, a conservative, who published Letters From a Westchester Farmer. ...read more.

Liberalism is a political philosophy which supports the protection of an individual's political and civil liberties. Americans did all that, through Conservatism. In this way, Americans were conservative on their liberalism. Throughout the long imperial crisis, Americans had repeatedly pursued the goal of reestablishing the empire as it had functioned before 1763, when colonial trade was protected and encouraged, and when colonial assemblies had exercised exclusive power over taxation and internal legislation. The many pacifist ways that Americans tried did not work, and finally, they had to resort to fighting to keep liberty, even thought it may mean death. Liberty was the most sacred right of Americans, and through the liberal actions that Americans took, the conservatism prevailed long after the Revolution, which eventually brought back the government to the longed for and desired Old Order. ...read more.