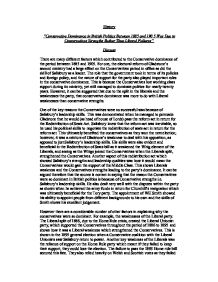 &quot;Conservative Dominance in British Politics Between 1885 and 1905 Was Due to Conservatives Strengths Rather Than Liberal Failures&quot; Discuss

History "Conservative Dominance in British Politics Between 1885 and 1905 Was Due to Conservatives Strengths Rather Than Liberal Failures" Discuss There are many different factors which contributed to the Conservative dominance of the period between 1885 and 1905. For one, the electoral reform of Gladstone's second ministry had a large effect on the Conservatives period in office as did the skill of Salisbury as a leader. The role that the government took in terms of its policies and foreign policy, and the nature of support for the party also played important roles in the conservative dominance. This is because the Conservatives lost working class support during its ministry, yet still managed to dominate politics for nearly twenty years. ...read more.

Another key weakness of the Liberals was the reliance of support on the Home Rule party which meant if they failed to keep their support, they could lose the election. The failure to pass the 1893 Home rule bill secured this fate. They also relied heavily on Welsh and Scottish votes as they failed to gain a majority in England. The reform act gave safe Tory constituencies in business areas which showed the weakness in Liberal policy as that ultimately helped the Conservatives win the Election. The Liberal party was also under weak leadership which meant that it was struggling to keep together. Without the leadership qualities of Gladstone they lacked a unifying factor that they needed. This helps to show that there were considerable weaknesses in the Liberal party which would mean that the Conservatives would gain support and therefore dominate politics. ...read more.