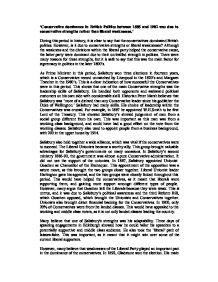 'Conservative dominance in British Politics between 1885and 1902 was due to conservative strengths rather than liberal weaknesses.'

'Conservative dominance in British Politics between 1885 and 1902 was due to conservative strengths rather than liberal weaknesses.' During this period in history, it is clear to say that the conservatives dominated British politics. However, is it due to conservative strengths or liberal weaknesses? Although the weakness and the divisions within the liberal party helped the conservative cause, the latter party were dominant due to their unrivalled strength in politics. There were many reasons for these strengths, but it is safe to say that this was the main factor for supremacy in politics in the later 1800's. As Prime Minister in this period, Salisbury won three elections in fourteen years, which is a Conservative record unmatched by Liverpool in the 1820's and Margaret Thatcher in the 1980's. This is a clear indication of how successful the Conservatives were in this period. This shows that one of the main Conservative strengths was the leadership skills of Salisbury. He handled both opponents and awkward political customers on his own side with considerable skill. Historian Peter Marsh believes that Salisbury was 'more of a diehard than any Conservative leader since his godfather the Duke of Wellington.' Salisbury had many skills. His choice of leadership within the Conservatives was crucial. For example, in 1887 he appointed W.H.Smith to be first Lord of the Treasury. ...read more.

In 1892, Gladstone won the election. His main focus was on Ireland, which was dismissed, and was defeated in the Lords. Gladstone wanted to dissolve Parliament to have general elections as a referendum. However, the Liberals refused. This division and weakness within the Liberal Party did hinder their progress, and also helped the dominance of the Conservatives. Although this is a valid argument, it is unfair to say that this is the main reason for conservative supremacy. The people didn't lose confidence in the Liberal Party purely for the reason that they were weak, the chose the Conservatives because it offered them a chance of stability and structure. 'Tory Democracy' was introduced, which means 'trust the people, and they will trust you.' This won support, and didn't rely on Liberal failures. The support of radical Joseph Chamberlain was also an important factor in Conservative dominance. It had been argued for some time that he may return to the Liberal Party. However in 1891, he praised Salisbury's social reforms; housing, education and factory acts. Imperialism was beginning to edge out social reform in Chamberlains mind, and the conservatives supported this view, and therefore gained more support because of it. In the third ministry of Salisbury, Chamberlain was offered any post he wanted, and Hartington was made President of the Council. ...read more.

In some areas, 'the public house was the vital component in attracting potential members to meeting.' Getting the support of the lower classes was vital, as this was the greatest number of people in a group in the country. Support was also gained from port towns such as Plymouth and Portsmouth, as the Conservatives policy of imperialism appealed to them. Armament factories also benefited from this policy, was did teaching in schools. Salisbury's Foreign Policy was also important. He avoided formal alliances in a period when they were common. He made pacts with both Italy and Austria. Salisbury always refused attempts in the late 1880s by German Chancellor Bismarck to draw him into the Triple Alliance of Germany, Austria and Italy. He believed that Britain's lack of definite alliances and commitments was to the country's advantage. Although Liberal weaknesses and divisions, such as the no support for leader Gladstone in the 1890s, helped the Conservative cause, this was not the main reason for dominance. The Conservatives owed a lot to the skills of Salisbury. He adapted well to the changing political climate, and also made policies which appealed to all walks of life, and a wide range of social people. He made astute political decisions and appointed opposition officials in his ranks. The dominance of conservatism was due to him, and his political strengths as a leader. ...read more.