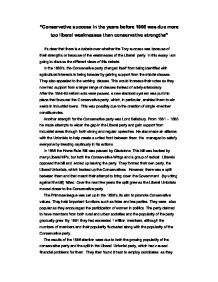 &quot;Conservative success in the years before 1906 was due more too liberal weaknesses than conservative strengths&quot;

"Conservative success in the years before 1906 was due more too liberal weaknesses than conservative strengths" It's clear that there is a debate over whether the Tory success was because of their strengths or because of the weaknesses of the Liberal party. In this essay I am going to discuss the different views of this debate. In the 1880's, the Conservative party changed itself from being identified with agricultural interests to being broader by gaining support from the middle classes. They also appealed to the working classes. This would increase their votes as they now had support from a larger range of classes instead of solely aristocracy. After the 1884-85 reform acts were passed, a new electoral system was put into place that favoured the Conservative party, which, in particular, enabled them to win seats in industrial towns. ...read more.

They formed their own party, the Liberal Unionists, which backed up the Conservatives. However, there was a split between them and that meant their attempt to bring down the Government (by voting against the bill) failed. Over the next few years the split grew as the Liberal Unionists moved closer to the Conservative party. The Primrose league was set up in the 1880's, its aim to promote Conservative values. They held important functions such as fetes and tea parties. They were also popular as they encouraged the participation of women in politics. The party claimed to have members from both rural and urban societies and the popularity of the party gradually grew. By 1891 they had exceeded 1 million members, although the numbers of members and their popularity fluctuated along with the popularity of the Conservative party. ...read more.

Over the next few years the leader of the party changed, moving from Rosebury to William Harcourt and finally Henry Campbell Bannerman in 1898. The changes in the party caused further weakness and they became less popular as their leadership was unstable. I believe that both Conservative strengths and Liberal weaknesses played a large part in the success of the Conservative party before 1906. The problems the Liberal party had with leadership didn't make them look stable and reliable to potential voters and, in turn, lost them support. This only increased support for the Conservatives. I think the Conservatives may have had the upper hand in their success as they worked hard on their campaigns and changed themselves to appeal to wider range of people. Generally I think that the Conservatives gained a lot of success of their own accord but their successes were amplified by the Liberals weaknesses. Jess Wills ...read more.