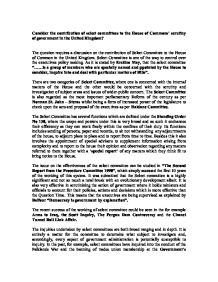 Consider the contribution of select committees to the House of Commons' scrutiny of government in the United Kingdom?

Consider the contribution of select committees to the House of Commons' scrutiny of government in the United Kingdom? The question requires a discussion on the contribution of Select Committee to the House of Common in the United Kingdom. Select Committee is one of the way to control over the executives policy making. As it is stated by Erskine May, that the select committee "......is a group of members who are specially named and ppointed by the House to consider, inquire into and deal with particular matters of Bills". There are two categories of Select Committee, where one is concerned with the internal matters of the House and the other would be concerned with the scrutiny and investigation of subject areas and issues of wider-public concern. The Select Committee is also regarded as the most important parliamentary Reform of the century as per Norman St. John - Steras whilst being a form of increased power of the legislature to check upon the acts and proposal of the executives as per Haldane Committee. The Select Committee has several functions which are defined under the Standing Order No 130, where the scope and powers under this is very broad and as such it enchances their efficiency as they can work freely within the confines of their duty. ...read more.

The wide ranging nature of inquiries undertaken is illustrated in the subject matter chosen by just two of the committees in the 1998-1999. However one has to take note that the fact that it has limited powers to call for people and papers which eventually leads to the problem of evident shortage of time and debates in acquiring it's constitutional objectives. An example of this task is found in the 'Salmonella Affair' where the select committee could not compel the attendance of members from either House of parliament. This gives a picture that it's constitutional objectives are limited Another example would be 'The Maxwell Pension Fund', where a summon to give evidence was issued but the parties refused relying on a claimed 'right of silence'. Whilst the 'Westland Affair' is where the select committee on the Defence announced it's intention to inquire into the matter and the government refused to allow witnesses on the grounds that the evidence could have major implications for the conduct of government and for relations between Ministers and civil servants. The classic doctrine was seen to operate most clearly in the Crichel Down Affair in 1954. Crichel Down, an area of some 725 acres were compulsorily acquired by the Air Ministry in 1937 to use as a bombing range. ...read more.

The Parliamentary control of National Finance has two aspects. First is the control over the government expenditure and secondly is the control over taxation. The control over expenditure is granted by Parliament in the 'Appropriation Act' and there are procedures to do it. 'The First Report of the Select Committee' has implemented some changes. There is now three annual 'estimate' devoted to consideration of the main and supplementary estimate, which now enables the House of Commons to debate on vote on the detail for the purpose. The other form of implementation are with regards to 'supply days' of being replaced by so 'opposition days'. The creation of The Public Account Committee is concerned with the public money that is already spent, is of economically and not wastefully. Whilst the National Audit Act 1983, provides for the appointment of the controller and Auditor General, establishing a Public Accounts Commission and a National Audit Office and making new provisions for promoting economy efficiency and effectiveness in the use of public money by government department and other authorities and bodies. In conclusion it can be submitted that it can be ascertained the Select Committee has been a very way of scrutinize the executive. Though not effective to a large extend but at a satisfactory position as it is subjected to limitations imposed in the practicing mechanism. ...read more.