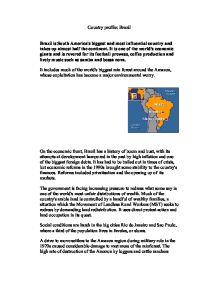 Country profile: Brazil Brazil is South America's biggest and most influential country and takes up almost half the continent. It is one of the world's economic giants and is revered for its football prowess, coffee production and lively music such as samba and bossa nova. It includes much of the world's biggest rain forest around the Amazon, whose exploitation has become a major environmental worry. On the economic front, Brazil has a history of boom and bust, with its attempts at development hampered in the past by high inflation and one of the biggest foreign debts. It has had to be bailed out in times of crisis, but economic reforms in the 1990s brought some stability to the country's finances. Reforms included privatisation and the opening up of its markets. ...read more.

Lula was born in 1945 in the impoverished northeast of Brazil. His family moved to Sao Paolo when he was seven and he left school at 14 to become a metal worker. In the 1970s, Lula honed his political skills as a fiery union leader in the industrial suburbs of Sao Paolo. He went on to help found the left-wing Workers' Party. South America's biggest media market is home to thousands of radio stations and hundreds of TV channels. Media ownership is highly concentrated. Home-grown conglomerates such as Globo, Brazil's most-successful broadcaster, dominate the market and run TV and radio networks, newspapers and pay-TV operations. Brazilian-made dramas and soaps are exported to TV markets around the world. Game shows and reality TV also garner huge audiences. Brazil's constitution guarantees a free press and vigorous media debate about controversial political and social matters is common. ...read more.