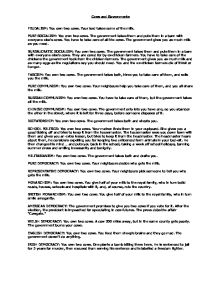 Eventually you expand your cow empire to the restaurant sector, setting up an international burger bar chain, using packaging produced in a third world country by starving infants. You finally globalise all cultures, establishing an international Mc Language and take over the world. Bwahahahaaaa... HONG KONG CAPITALISM: You own two cows. You sell three of them to your publicly-listed company, using letters of credit opened by your brother-in-law at the bank, then execute a debt / equity swap with associated general offer so that you get all four cows back, with a tax deduction for keeping five cows. The milk rights of six cows are transferred via a Panamanian intermediary to a Cayman Islands company secretly owned by the majority shareholder, who sells the rights to all seven cows' milk back to the listed company. The annual report says that the company owns eight cows, with an option on one more. Meanwhile, you kill the two cows because the fung shiu is bad. ENVIRONMENTALISM: You own two cows. The government bans you from milking, killing, feeding or touching them. They consequently die. You are thrown in prison for crimes against the earth ... man. FEMINISM: You own two cows. They get married and adopt a veal calf. SURREALISM: You own two giraffes. The government requires you to take harmonica lessons. TOTALITARIANISM: You own two cows. The government takes them and denies they ever existed. Milk is banned. ...read more.